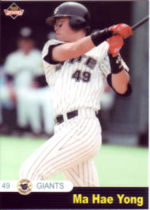 Hae-yong Ma is a former Korea Baseball Organization batting champion and Korean Series MVP. He hit over 250 homers as well in his career.

As an amateur, Ma played for the South Korean national team. In the 1993 Intercontinental Cup, he hit .273/.342/.545 as the second baseman. Japan's Toshihisa Nishi was named the best at the position in that tourney. Ma was 2 for 6 with 3 walks in the 1994 Baseball World Cup.

Ma regressed in 2000 with a .294/~.380/.497 batting line with 23 home runs and 90 RBI. That year, he was part of the successful effort to form the Korean Pro Baseball Players Association which was spearheaded by Jin-woo Song. At one point, it appeared as if Ma might be banned for life from the KBO due to his unionizing efforts.

Ma had another fine season in 2002. He hit .323/~.377/.592 with 33 homers, 92 runs and 116 RBI to join with Seung-yeop Lee in leading the charge for the Lions. He finished second in the KBO in average, trailing Sung-ho Jang by 20 points and tying Lee and Jeong-soo Shim at .323. He led with 172 hits. He won the KBO Gold Glove at DH as the best offensive DH, not the best potential fielding one. In the Korean Series, he dominated. He drove in a run in game three, was 4 for 4 with 3 RBI in game four, cracked two homers in game five, then saved the best for last. With Samsung down 9-6 in the bottom of the 9th, Seung-yeop Lee homered off of Sang-hoon Lee with two aboard to tie it and Ma followed with a shot against Won-ho Choi to end it. Ma won the Korean Series MVP award for his excellence.

This biographical article is missing the person's: birth place
Retrieved from "https://www.baseball-reference.com/bpv/index.php?title=Hae-yong_Ma&oldid=735258"
Categories: