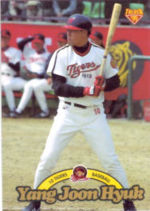 Jun-hyeok Yang is a sixteen-year veteran outfielder in the Korea Baseball Organization, having played thirteen years for the Samsung Lions. He is the current career leader in hits, runs scored, home runs, RBI, total bases and walks. He won the Rookie of the Year Award in his first season, and has won seven Gold Gloves.

Yang was drafted out of university in with the first pick of the 1993 Korea Baseball Organization draft by the Samsung Lions. He had played for South Korea in the 1989 Intercontinental Cup and 1990 Asian Games. He signed for ₩101 million, a record for a batter, with an annual salary of ₩18 million. Yang made his professional debut on April 10 at Taegu Stadium for the Lions against the Ssangbangwool Raiders; against Chang-sik Im he hit two doubles. His first game was a fortuitous omen as he would be named the Rookie of the Year after hitting .341/.598/.436 with 23 home runs and 90 runs batted in. He led the league in all three rate stats (batting average, slugging percentage, and on-base percentage) and his 130 hits marked the first of fourteen consecutive seasons with 100 or more base hits (as of 2006).

Yang came was once again two short of the league lead in home runs in 1997 and in 1998 he led the league in batting average at .342 (156 hits in 456 at-bats) and was the league leader in base hits as well. He won three consecutive Gold Gloves from 1996 to 1998; the first two in the outfield and the third as a designated hitter.

Despite being the reigning batting champion, Yang was traded in the 1998 off-season to the Haitai Tigers (along with Chae-jin Gwak and Du-seong Hwang) for defending saves points leader Chang-yong Im. The trade worked out well for both clubs, Yang posted career-bests in home runs (32) and runs batted in (105) while Im had the league's best earned run average. During the season he also played for the national team at the 1999 Asian Baseball Championships; he helped them win Gold and made the All-Tournament team at DH. Yang, however, would spend just a single season with the Tigers before being traded to the LG Twins for Dunpro and ₩0.5 billion.

In 2000, he helped organize the Korea Professional Baseball Players Association.

Yang played well for LG, despite losing some power, after hitting 117 home runs in the previous four season, he just hit 29 during his two years with the Twins. In 2001, he won his fourth batting title with a .355 average (156 hits in 439 at-bats) as well as his fourth ; his second as a designated hitter. After the 2002 season, Yang became a free agent. He would resign with his former club, the Samsung Lions, for four years at 2.32 billion won.

In his first year back with the Lions, Yang had a off-year. For the first time in his ten-year career he failed to hit .300, managing a .276 average. Even though he played in the most games of his career, Yang posted career-lows in slugging percentage, on-base percentage, home runs, runs batted in (by over thirty) and for the first time in his career stuck out more than he walked. Still, he made the Korean Series for the first time; the series where his current club, the Lions, defeated his former one, the Twins, four games to two.

In the 2005 season, despite hitting career-lows in batting average (.261) and slugging percentage (.404) and only getting 394 at-bats, Yang continued break the records set by Jang who would retire during the season after a brief seven-game stint with the Hanwha Eagles. On June 25, he broke the record for most hits in a career at Munhak Baseball Stadium against the SK Wyverns's Gil-hyeon Yun. A month later, on July 19, he was walked for a record 998th time and later in the season on September 4 set the record for most runs scored at 1044. Yang had another Gold Glove season in the 2006 with a .303/.477/.445 batting line.

The veteran tied Jong-hoon Jang for the all-time KBO record of 340 home runs on April 14. He then missed some time to injury and was back in the minors for a spell. On May 9, he hit a solo homer off Taek-hyun Ryu to claim the home run record. He now held the KBO records for homers, hits, doubles, runs, RBI, walks, total bases and cycles (2). He said "It is really an honor for me to break the record, especially since I never won a home run title." The home run record would stand until 2013 when Seung-yeop Lee broke it.