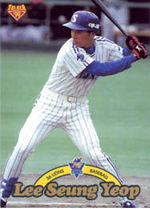 Seung-Yeop Lee was one of the most prolific home run hitters in the Korea Baseball Organization, where he was a five-time MVP. He then played for seven years in Nippon Pro Baseball before returning to the KBO. As of 2012, he has hit 489 homers between the KBO and NPB. He is also an Olympic Gold Medalist.

Lee hit .394 in the 1994 World Junior Championship with 5 doubles, 2 triples, 3 homers, 13 runs and 10 RBI to help South Korea to its second Gold Medal in the event's history. He somehow was left off of the tournament All-Star team despite finishing among the leaders in every category.

After his record-breaking 2003 campaign, Seung-Yeop declared his interest in playing in Major League Baseball. He had previously spent spring training with the Chicago Cubs in 2002 and the Florida Marlins in 2003. While he was given a glance by some teams, and offered minor-league contracts, he did not get the guarantee of an MLB job that he was looking for.

Lee opted instead to go to Japan, where he signed with the Chiba Lotte Marines. Lee was a clear bust in 2004, hitting only .240/.328/.450 with 14 homers as the Marines' DH. It looked like the American teams had been wise to pass on Lee. In 2005 Seung-Yeop improved while moving to left field part-time (which he shared with Matt Franco) while remaining at DH primarily. He hit .260/.315/.551 with 30 homers in 117 games. While his OBP was poor for a DH-LF, he was 7th in the Pacific League in slugging, 6th in homers and 8th in RBI. He starred in the Japan Series, going 4 for 4 with 2 doubles, a homer and all 3 Chiba Lotte RBI in the final game. The Marines and Lee split ways after the year, though, due to salary disputes, and he signed with the Yomiuri Giants, still saying he wanted to get a crack at the US majors one day. As he turned 30 during the 2006 season, it was unlikely many major league teams would be interested unless he had a breakthrough year. He did draw quite a bit of international attention preceding the 2006 campaign, and got his first popular exposure in the USA when he hit 5 homers in the first 6 games of the World Baseball Classic, all of which his South Korea team won. In 2006, he had the big year he needed, batting .323/.389/.615 (second in average behind Kosuke Fukudome, third in slugging and tied for 5th in OBP) with 101 runs (4th in the Central League), 30 doubles (tied for 4th), 41 homers (second to Tyrone Woods), 108 RBI (4th) and 322 total bases (4th). He was named by some as a MVP candidate during the year but finished a distant 9th, 4th among position players behind Fukudome, Woods and Tomoaki Kanemoto.

On August 1, 2006, Lee hit his 400th career professional home run. Only Sadaharu Oh and Alex Rodriguez had previously reached that level while in their 20s.

MLB teams were showing the most interest they ever had in Lee but he opted to re-sign with Yomiuri. He struggled in 2007, hitting .254/.312/.453 with 15 HR by July 12 and was demoted to ni-gun Korea Times article on Lee's demotion. Lee bounced back a bit in the final months to finish with a .274/.322/.501 with 30 HR and 84 runs. He tied Takahiro Arai for 7th in the CL in runs, tied for 7th in the CL in doubles (29), was 8th in the league in home runs, 9th in slugging and 4th with 119 strikeouts. Lee was held scoreless in the first-round playoff defeat to the Chunichi Dragons. An inflamed base of his left thumb was cited as one reason for the demotion; the problem had apparently been bothering him for at least three years. He had surgery on his thumb after the season. Giants owner Tsuneo Watanabe was highly critical of Lee after the year.

Lee put on another excellent performance in international competition in the 2008 Final Olympic Qualification Tournament, helping South Korea earn a ticket to the 2008 Olympics. Lee hit .478/.500/.870 with 5 runs, 12 RBI, 3 doubles and 2 home runs in 7 games. He was 5th in the competition in average, led in RBI (four ahead of anyone else) and tied Matt Rogelstad, Carlos Valencia, Karim Garcia and Kuo-Hui Lo for second in home runs, one behind Nick Weglarz. He drove in four against Australia, 3 against Germany and 2 against Mexico.

Lee started off 7 for 52 with 2 RBI and no home runs in 2008 and was sent to ni-gun. He joined South Korea for the 2008 Olympics and came up with several key hits despite a .167/.265/.400 batting line; he drove in 6 runs in 8 games. Against the Japanese national team in the semifinals, he broke a 2-2 tie in the 8th with a 2-run homer off of Hitoki Iwase to help South Korea advance to the Gold Medal game. In that contest, he delivered a 2-run first-inning home run against Norberto González that was the big blow in a 3-2 win by Korea as they won Gold.

Lee returned to Korea and Samsung in 2012 and had a big year, at .307/.384/.502 with 28 doubles, 21 HR, 84 runs. He was 6th in the 2012 KBO in slugging (between Seok-min Park and Seong-hoon Jeong), 6th in average (between Jin-young Lee and Jeong), runs (3rd, 2 behind Yong-kyu Lee and one behind Jung Choi), doubles (tied for 6th with Sang-ho Jung), homers (5th, between Seok-min Park and Min-ho Kang) and RBI (3rd after Byung-ho Park and Seok-min Park). In the 2012 Korean Series, he remained hot, going 8 for 23 with 7 RBI in six games as Samsung beat the SK Wyverns to the title. The Lion King drove in all 3 Lions runs in the opener, including a 2-run homer off Hee-sang Yoon to start the Series scoring, then delivered a 3-run triple in the finale. He was named Korean Series MVP, one honor he hadn't claimed in his first go-around in the KBO.

In the 2013 World Baseball Classic, the old-timer was back on the Korean national team and did very well, going 4 for 10 with 3 doubles, 3 runs and a RBI to lead them in OPS and finish second to Dae-ho Lee in average. They were surprisingly ousted in 3 games when his teammates did not fare as well. He still tied for 4th in the Classic in doubles despite playing many fewer games than co-leaders Nelson Cruz, Robinson Cano and Carlos Beltran, each of whom hit four.

Despite missing eight seasons to play in NPB, Lee became the KBO's career home run leader when he hit #352 off Hee-sang Yoon on June 20, 2013 to break the record held by former teammate Joon-hyuk Yang. He finished the season at .253/.298/.395 for his worst season in the KBO. Samsung won the 2013 Korean Series. In the 2013 Asia Series, Lee hit a decisive 3-run homer off Fortitudo Bologna's Junior Oberto.

He rebounded in 2014 to bat .308/.358/.557 with 30 doubles, 32 homers and 101 RBI; the league offensive totals were up, so the numbers weren't quite as impressive as they might have been in prior years but he was still 4th in homers (behind Byung-ho Park, Jung-ho Kang and Eric Thames), tied for 5th in RBI (with Sung-bum Na) and 9th in slugging (between Tae-kyun Kim and Yamaico Navarro). When he homered off Henry Sosa in game 2 of the 2014 Korean Series, he broke Woods' KBO postseason record for career homers as it was his 14th. Samsung won yet another title. He won his 9th Gold Glove in the KBO, this time at DH, to surpass Dae-hwa Han and Joon-hyuk Yang for the all-time league lead regardless of position (again, made even more impressive by the eight years he played in Japan).