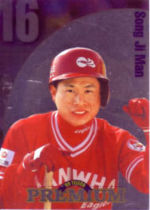 Ji-man Song has hit over 250 home runs in the Korea Baseball Organization and has played for the South Korean national team. He once led the KBO in slugging.

Ji-man had his career year in 2000. He batted .338/~.412/.622, .002 behind Jong-ho Park for the batting title and leading the KBO in slugging. He was 4th in average, just behind Dong-joo Kim and Tilson Brito in addition to Park; he was right ahead of Jay Davis and Julio Franco. He had 33 doubles, 32 home runs, 90 RBI and 93 runs. He won a Gold Glove, joining Byung-kyu Lee and Jae-hong Park in the outfield. He also won the All-Star Game MVP Award that season. Song was on the Korean roster for the 2000 Olympics but injured his ankle three days before the Games were to start and was replaced on the roster, missing out on a Bronze Medal as a result.

Hyundai became the Woori Heroes in 2008.