The Hyundai Unicorns were a member of the Korea Baseball Organization; they were formed in 1996 but quickly established themselves as a KBO powerhouse. They won titles in '98, 2000, 2003 and 2004 to move into second all-time in titles within a decade of their founding, trailing only the Kia Tigers. They were based in Suwon.

The club was owned by the Hyundai Corporation as the name implies. They were based in Suwon Baseball Stadium (Su-won Ya-gu Jang). 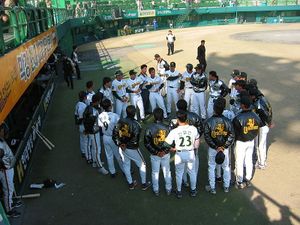 When Hyundai ran into financial problems, they abandoned the baseball team, which was sold and became the Woori Heroes.