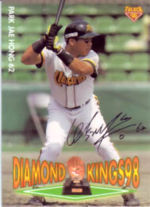 Jae-hong Park is a former Korea Baseball Organization Rookie of the Year and All-Star who was a 30-30 man three times, becoming the first KBO player to reach that mark. A four-time Gold Glove winner in the outfield, he has played for South Korea in the Olympics.

Park debuted in 1996 with the Hyundai Unicorns. He hit .295/.369/.556 with 36 steals and a league-leading 30 home runs. The rookie became the first player in the 15-year history of the KBO to reach the 30-30 mark. He also drove in 108 runs, leading the league, giving him two legs of the Triple Crown. Additionally, he shone in the field, winning a KBO Gold Glove to complete the all-around season. He was a unanimous pick as the KBO Rookie of the Year.

He was to play in the 2006 World Baseball Classic but was sidelined by injury; Ji-man Song took his spot on the roster.

Park won the Home Run Derby prior to the 2008 KBO All-Star Game, beating Sharnol Adriana. Adriana and other members of the Cuban and Dutch Olympic teams competed against the South Koreans. During the 2008 KBO season, Park hit .318/.420/.538 with 19 home runs and 72 RBI but was only 5-for-11 in steals. He was 6th in the KBO in average, 5th in homers, second in OBP (behind Hyun-soo Kim) and third in slugging (behind Tae-kyun Kim and Karim Garcia). He was third in OPS behind Tae-kyun Kim and Hyun-soo Kim. He helped SK post the best record in KBO history and then win the 2008 Korean Series.

On April 23, 2009, Park stole the 250th base of his career, beating a Min-ho Kang threw. He became the first player in KBO history to reach 250 steals and 250 homers; only 19 players in MLB history and 4 in NPB history had done so. On May 6, Park was threatened by a Lotte Giants fan who ran onto the field, holding a plastic knife with the words "Did you apologize to Il-yeop" written on it? Il-yeop Kim had argued with Park two weeks prior about a pitch that Kim threw at Park's knee.