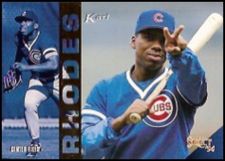 Tuffy Rhodes has been one of the top foreign players in the history of Nippon Pro Baseball. He holds many records for gaijin, including home runs and RBI in a career. He tied the single-season NPB home run record that had been held by Sadaharu Oh for decades. The Japanese reaction to Rhodes' chase generated controversy both in Japan and the United States. Rhodes was the second foreign player in NPB history to cover the required 10 seasons to no longer be deemed a foreigner. He holds the all-time Japanese record for ejections. Rhodes retired for a spell in 2006 but returned in 2007 as a productive player for the Orix Buffaloes.

Early Career in the Minor Leagues[edit]

Rhodes was signed as a third-round draft pick by the Houston Astros and scout David Lakey in 1986 out of Western Hills High School, which had produced several major leaguers.[1] He made his pro debut with the Gulf Coast League Astros in 1986. He hit .293 with 32 walks, no homers and 14 steals in 62 games as a leadoff-type prospect, hardly the slugger he would become. He was 9th in the Gulf Coast League in average, in between Edinson Renteria and Rey Sanchez.[2]

In '87, he only polled 3 homers in 413 AB and his average fell to .252 while playing for the Asheville Tourists, who finished second in the class A South Atlantic League. On the positive side, he drew 77 walks (tied for 2nd in the league, trailing Mike Basso by 6) and stole 43 bases. He was only third on his team in steals, as Asheville swiped 335 bases.[3]

In 1988, Rhodes was promoted to the Florida State League and batted .283/.391/.308 with only 8 extra-base hits in 452 AB. His Osceola Astros finished second in the league to the St. Lucie Mets. Rhodes finished second in the league with 65 steals (22 behind Lou Frazier), was second in OBP and 4th with 81 walks, continuing to stake his claim as a potential leadoff hitter. He fielded .992 with 14 outfield assists. Rhodes turned 20 late in the season. still having lots of development potential. League managers rated him the #3 prospect in the league, behind Chris Nichting and Mike Simms and well ahead of Sammy Sosa, Juan Gonzalez, Kenny Rogers, Pat Hentgen and Dean Palmer.[4]

By 1990, at the age of 21, Tuffy made his AAA debut with the Tucson Toros, showing solid contact (.275) and stealing 24 while only being caught four times, but his walks fell drastically (47 in 107 games). He only hit 3 homers but 11 triples showed he was becoming more of a slugger. His OBP was .350 and he slugged .418. His 20 outfield assists led the Pacific Coast LeagueHe was ranked the 9th-best prospect in the PCL according to Baseball America. That season he was called up to the Astros. In his first major league, he hit 7th and started in left field. He popped out against John Burkett in his first big-league at-bat. His first hit came in the 8th inning, a line drive single against Steve Bedrosian; he came around to score on a passed ball by Gary Carter. He did okay (.244/.340/.372, a 99 OPS+) in 38 games for the 1990 Astros, though he was one of the 10 youngest players in the 1990 NL.[6]

Rhodes became the Cubs' main CF in 1994. He hit 3 home runs off of Dwight Gooden on Opening Day to become the only player to homer in each of his first three at-bats of the season. Only George Bell had previously hit three on Opening Day.[17] Rhodes hit only 5 more all season and his .234/.318/.387 line didn't cut it as a big-league OF - he was drawing walks and hitting some homers, but the batting average bought the total line down below acceptable levels.

He started 1995 by going just 2 for 16 and the Cubs placed him on waivers. The Red Sox picked him up but he went only 2 for 25 for them. Completing his run of the AAA leagues, he made his International League debut and hit .285/.371/.480 but was now almost 27 and coming off two disappointing seasons in the majors.[19] 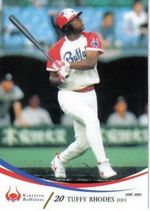 Rhodes was still relatively young and had accomplished a good deal at AAA, making him a player worth a chance from a Japanese team. A weight-training program in Japan bulked him up from 175 pounds to 210 over the years.[20] The Kintetsu Buffaloes signed Rhodes as a replacement for slugger Ralph Bryant, who had just retired after having won 3 home run titles in his NPB career. Rhodes hit .293/.363/.517 with 27 homers and 97 RBI in his Japanese debut - he was second in the Pacific League in runs (80, trailing Ichiro Suzuki, hits (147, behind Suzuki), doubles (29, tied with Yukio Tanaka and one behind Kazuhiro Kiyohara) and RBI (trailing Troy Neel). He was five home runs shy of Neel, the league leader.[21]

In 1997, his homer total fell to 22 but he hit .307/.409/.509 and even showed a flash of his former speed (22 steals). He made his first Pacific League All-Star team, finished second in the league in walks (87, 3 behind leader Ken Suzuki), tied Hiroki Kokubo for the lead in doubles (37), was 3rd in RBI (102, behind Kokubo and Domingo Martinez) and was named to the Best Nine squad, as one of the top 3 outfielders in the Pacific League; he joined Ichiro Suzuki and Makoto Sasaki.

1998 saw a backwards slide for Tuffy. He hit .257/.359/.441 and was 3rd in the league with 81 walks. He again hit 22 homers and was outhit by teammates like Phil Clark and Norihiro Nakamura. He somehow found his way onto the All-Star roster once more.

In 2000, Rhodes again suffered a backslide - .272/.345/.470 with 25 homers and 58 walks. He didn't place among the league leaders in anything but somehow made yet another All-Star team. In 2001, he again bounced back, in amazing fashion - .327/.421/.662 - he set Pacific League records in runs (137), homers (55) and total bases (364) and won the MVP Award.[23] With teammate Nakamura, he combined for a record 101 homers, the top mark ever for a duo of teammates in Japan, beating any Oh-Nagashima combo. The season was marred by a late-season matchup with the Daiei Hawks, managed by Sadaharu Oh. Oh had the Central League (and Japanese) record of 55 home runs and his team pitched around Rhodes all series. In one game, he saw only 2 strikes in 18 pitches. Daiei battery coach Yoshiharu Wakana claimed it was his responsibility, going so far as to say, "I didn't want a foreigner to break the record."[24] Many Japanese people stood up for Rhodes. Nakamura called it rude and NPB commissioner Hiromori Kawashima said it destroyed notions of fair play that were so essential to baseball.[25] Wladimir Balentien would break the home run record in 2013.

In 2004, the big money came calling and Rhodes signed with the Yomiuri Giants, the damn Yankees of Japan. He expressed doubts about his chances of winning a home run title in the same league as Hiroki Kokubo, Tyrone Woods and Akira Eto, but he did get a share of the title in his first season in the Central League, hitting 45 to tie Woods for the lead, one ahead of Akinori Iwamura. Rhodes hit .287/.378/.577 and was again named to the Best Nine. He became the second player in Japan to win HR titles in both leagues - the first was Hiromitsu Ochiai. The season was not what Yomiuri had hoped for - they set a Japanese team HR record but a lack of pitching and OBP led to a 3rd-place finish.

2005 brought good news and bad news for the 38-year old slugger. Having played 10 years in Japan, he officially became Japanese and did not count as a foreign player for roster limit purposes. He became just the second player to so qualify, following Taiwanese hurler Taigen Kaku, who pitched for Seibu from 1985 to 1996.[27] Tuffy was still cranking them out - at the All-Star break he had hit 25 homers, tied with teammate Shinnosuke Abe for the Central League lead and his 51 walks ranked 3rd. Hewas only hitting .240, though, which left him off the top 10 list in both OBP and slugging. The Giants were just 39-46, 5th in the 6-team Central, a highly unusual place for them to be. Additionally Rhodes had gotten into arguments with coach Sumio Hirota and refused to do a hero interview once.[28] On August 9th, Rhodes went on the DL due to a shoulder injury. On August 19th, he came to the US for treatment and his season was deemed over.

Yomiuri did not bring him back in 2006 and his salary possibly prevented other teams from expressing an interest. He finished the year at .240/.337/.478 with 27 homers and 55 BB. Also in 2005, Rhodes set the NPB record for career ejections, when he was thrown out of a game in May. It was his 9th ejection, breaking the mark held by Masaichi Kaneda.

After the season ended, Rhodes was released by the Giants.[29] The 37-year-old, recovering from injury, signed a minor league contract with the Cincinnati Reds that off-season.[30] He struggled in 12 spring training games, hitting .222, and was released.[31] He then retired to his home in Houston, TX to raise his children.

In 2007, Rhodes was invited to the Orix Buffaloes for a try-out to see if he could still produce.[32] He impressed enough to earn a $400,000 contract. [33] On Opening Day, Tuffy launched a two-run homer. On April 4, he became the 28th player in NPB history to reach 1,000 RBI and the first foreigner to do so. Doing so in his 1,325th game in Japan, he was the third-quickest player to the mark, trailing only Hiromitsu Ochiai and Fumio Fujimura.[34]

He extended his ejection record, getting into a fight with Marines catcher Tomoya Satozaki in mid-July over a questionable pitch. Rhodes was suspended a game and fined $100,000. Coaches Yoshihiko Takahashi and Jon Debus were also ejected and fined for their role in the fight.[35]

On August 7, Rhodes reached 3,000 total bases in Japan, becoming the first foreigner to have so many.[36] On September 2, he homered off of Yasuhiko Yabuta for his 400th home run in Japan. It made him the 14th player and first foreigner to have hit that many. It also was his 40th circuit clout of the season, giving him six 40-homer years in NPB, second all-time to Sadaharu Oh's 13.[37] On September 19, his season was cut short due to a groin injury.[38][39] Rhodes was leading the Pacific League in home runs at the time, but fellow old-timer Takeshi Yamasaki surpassed him in the closing weeks of the year.

Rhodes has had an amazing career in Japan. His 442 homers through 2008 rank him among the top 20 in NPB history, over 100 more than any other foreigner. While he ran into some trouble with PR and management in his career in Japan, he adapted better to Japanese life than most Americans and had become fluent in Japanese and not sought to impose his ways on Japanese culture.

A March 2010 interview with Rhodes indicates that he hasn't had any interest from NPB teams and has moved on to assisting his son's basketball career through the high school and AAU circuit. [44]