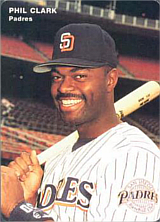 Phil embarked on a strong career in Nippon Pro Baseball, earning three Best Nine Awards in four seasons with the Kintetsu Buffaloes, where he teamed with fellow gaijin Tuffy Rhodes. Phil placed second in the 1997 Pacific League batting race to Ichiro Suzuki, batting .331 with 23 home runs. In 1998, he established a NPB record for a season with 48 doubles, batting .320 with 31 home runs and 114 RBI. Injuries sapped his effectiveness after that, and he was released after missing much of 2000 due to a bad hit by pitch.