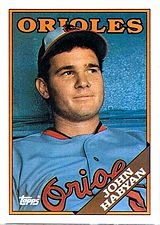 John Habyan was drafted by the Baltimore Orioles in the third round of the 1982 amateur draft. He pitched in the major leagues from 1985 to 1996 with the Orioles and several other teams. Habyan started 18 games early in career, but worked mostly as a reliever. He finished with a career record of 26-24 with an ERA of 3.85 and FIP of 3.78.

While a member of the New York Yankees, Habyan was the set-up man for Steve Farr, a former member of the Kansas City Royals. After being traded to the Royals midway through the 1993 season, Habyan became the set-up man for Royals closer Jeff Montgomery for the last two months of the season. He then signed a free agent contract with the St. Louis Cardinals for 1994.

Following his retirement from professional baseball, Habyan returned to his alma mater, St. John the Baptist Diocesan High School, to serve as assistant varsity baseball coach. Habyan took over the reins of the Cougar program in 1998 with considerable success. A five-time Nassau Suffolk Catholic High School Athletic Association Coach of the Year, Habyan led the Cougars to league titles in 2002, 2008, 2013 and 2014. He left the program after the 2015 season to move into college coaching. Habyan joined the Hofstra University Pride as their pitching coach from 2016-2018.