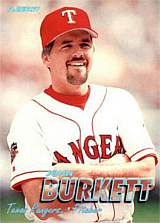 "He has good control and he doesn't beat himself." - Roger Craig 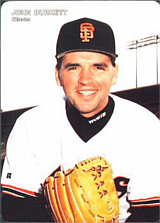 John Burkett was a two-time All-Star who won over 150 games in 15 years in the major leagues. He threw a sinker, a curveball and a split-fingered fastball.

Burkett was signed as a 6th round pick in the 1983 draft by the San Francisco Giants and scout Bob Folkins. As of 2019, John was the only player to ever make the big leagues having been drafted out of Beaver High School in Beaver, Pennsylvania. He was one of four future major league pitchers taken in the sixth round that year, but the other three combined for only 9 wins - Scott Nielsen had the 9; both Scott May and John Leister had 0. Burkett's early professional career did not show any indications of future MLB stardom. With the 1983 Great Falls Giants, he was 2-6 with a 6.26 ERA, tying for 4th in the Pioneer League in losses while allowing 73 hits and 30 walks in 50 1/3 innings. Moving up to the Clinton Giants in 1984, he showed progress at 7-6, 4.33 while improving his control drastically (38 walks in 126 2/3 innings). With the '85 Fresno Giants, he was better yet at 7-4, 2.87. He was their second most effective starter after Brian Ohnoutka.

John split 1986 between Fresno (0-3, 5.47) and the Shreveport Giants (10-6, 2.66, 99 hits in 128 2/3 innings). He finished second in the Texas League in ERA behind George Ferran but was left off the TL All-Star team; picked instead were Ferran, Shawn Hillegas, Dan Scarpetta, Jeff Innis and Charlie Corbell. Despite his fine 1986, he returned to Shreveport a year later and remained sharp, going 14-8 with a 3.34 ERA. He finished 6th in ERA, between Dean Freeland and Brad Wheeler but was only third on his own club. He led the TL with 177 2/3 innings and his 14 wins tied Marty Reed for tops. He again was left off the TL All-Star squad - the hurlers chosen were Dennis Cook, Chuck McGrath, David West and Steve Peters.

He got a September call-up to the majors for his performance instead. In his MLB debut, he relieved Atlee Hammaker with a 10-0 lead in the 6th inning on a September 15, 1987 game with the San Diego Padres. He retired Stan Jefferson, then served up a gopher ball to Carmelo Martinez before recovering to get Rob Nelson on a strikeout and Mark Parent on a grounder. In the 7th, he allowed a leadoff double to Randy Ready. Joey Cora and Luis Salazar both flew out but Shawn Abner homered. Pinch-hitter Shane Mack went down on strikes and Jon Perlman replaced John in the 8th. In four more innings for the Giants, he allowed only one more run, an unearned one.

Burkett spent a little of 1990 with Phoenix (2-1, 2.74) but was up in the majors for most of the year, returning after a two-year absence. He would only return to the minors for four games over the remainder of his career. On May 30, he got his first big league hit, a run-scoring single off Shawn Boskie to score Rick Leach. In 1990, he led all rookies with 14 wins (by midseason, he was 9-2). He only lost 7 and had a 3.79 ERA for a 96 ERA+. He tied for 7th in the NL in wins, even with John Smoltz, Jose Rijo, David Cone and Ed Whitson, an impressive group. He was also among the league leaders in winning percentage, tied for 5th with Mike Harkey. He and Harkey were the only pitchers to get votes for Rookie of the Year; Burkett placed 4th behind David Justice, Delino DeShields and Hal Morris. In 1991, he fell to 12-11, 4.18 with a 86 ERA+. He tied for 7th in the NL in homers allowed (19), was 7th in hits allowed (223, between Terry Mulholland and Charlie Leibrandt), was 5th with 96 earned runs allowed and led with 10 hit batsmen. His ERA+ was 86 again with the 1992 Giants while his record improved to 13-9, 3.84. He was San Francisco's second-most effective starter after ace Bill Swift.

John won eight of his first nine decisions for the Giants in 1993; he ended the year with an NL-leading 22 victories (tied with Tom Glavine). He lost 7 games and had a 3.65 ERA and 107 ERA+ while walking only 40 in 231 2/3 innings. Not only that, he also played error-free ball and tied for 9th in the league with 12 sacrifice hits. He was among the NL leaders in WHIP (1.14, 5th between Mulholland and Pete Harnisch), third in lowest walk rate (after Bob Tewksbury and Rene Arocha), 8th in innings pitched and tied for second in hit batsmen (11, even with Pedro Martinez). He was also the losing pitcher in the 1993 All-Star Game. Relieving Andy Benes in the 5th inning of a 2-2 tie, he immediately ran into trouble. Ivan Rodriguez greeted him with a double and advanced on a grounder by Roberto Alomar. Pinch-hitter Albert Belle singled to make it 3-2, then advanced on an error and scored on a hit by Ken Griffey Jr. Burkett recovered to fan Joe Carter but walked Cecil Fielder then gave up a double to Kirby Puckett for a 5-2 score, at which time he was relieved by Steve Avery; the NL lost, 9-3. John was 4th in voting for the Cy Young, behind Greg Maddux, teammate Swift and Glavine, all of whom had lower ERAs. He also got one vote for MVP, his lone career MVP vote.

In the offseason during the strike, Burkett was dealt to the Texas Rangers for Desi Wilson and Rich Aurilia. When the strike ended, the Rangers decided to keep Kenny Rogers over John and cut him loose. He was quickly signed by the Florida Marlins and put together a 14-14, 4.30 season (98 ERA+). He finished among the NL leaders in wins (tied for 5th with Pat Rapp, Pedro Martinez and Jaime Navarro), complete games (4, tied for 5th), hits allowed (208, 4th) and losses (tied for second with Tom Candiotti and Jeff Fassero, two behind leader Paul Wagner). He also had a perfect fielding percentage for the third year in a row. After a 6-10, 4.32 start for the 1996 Marlins, Burkett was traded to Texas for a second time, this time for Ryan Dempster and a player to be named later in future 20 game winner Rick Helling. Texas kept him around this time and he was 5-2 with a 4.06 ERA in 10 late-season starts. Burkett won the first postseason game played by the Rangers, Game 1 of the 1996 ALDS over the Yankees. He went the distance to beat David Cone, 6-2, remaining the only pitcher to win a postseason game for the Rangers until 2010. 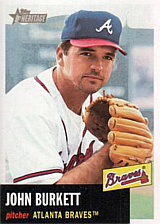 Burkett signed with the Tampa Bay Devil Rays for 2000 but was released before the season, the second time in five years he endured this particular setback. Returning to the NL, he signed with the Atlanta Braves, where there was less pressure in the back end of their rotation with Maddux, Glavine and Kevin Millwood up top. He turned in a 10-6, 4.89 summer for the Bravos, appearing in one game in the NLDS, where Atlanta was swept by the Cardinals.

In 2001, Burkett had his best ERA+ at 147. He struck out 187 in 219 1/3 innings and had a 3.04 ERA but just a 12-12 record to show for all his success. In the 2001 All-Star Game, he pitched one inning in the NL's 4-1 loss to the AL. Relieving Chan-ho Park in the 4th, he retired Magglio Ordonez, Bret Boone and Mike Cameron in order, striking out Cameron. Mike Hampton succeeded him. He was third in the NL in ERA, behind only the fearsome Arizona duo of Randy Johnson and Curt Schilling and ahead of teammate Maddux. He was also among the league leaders in fielding percentage (his 4th perfect season), WHIP (1.17, 8th between Park and Kevin Appier), innings pitched (10th), strikeouts (6th, between Javier Vazquez and Matt Morris) and numerous sabermetric measures. He did not get any votes for the Cy Young Award despite a better ERA than several men that did receive votes. In the NLDS, he beat the Astros and Shane Reynolds in Game 3 to complete a sweep. In the NLCS, he was roughed up in a Game 3 loss to Schilling as Atlanta fell to the juggernaut Arizona Diamondbacks.

A free agent again, Burkett signed with the Boston Red Sox. In 2002, the old-timer was 13-8 with a 4.53 ERA (101 ERA+), forming a solid foundation in the middle of the BoSox rotation, well behind Pedro Martinez and Derek Lowe but ahead of Frank Castillo. He was 10th in the AL in strikeout rate. He finished his career with the 2003 Sawx, falling to 12-9, 5.15 for a 91 ERA+. He tied Bartolo Colon and Ramon Ortiz for 8th in the AL with 104 earned runs allowed. He then gave up 9 runs in 9 postseason innings, getting no decisions as Boston made it to the ALCS before faltering to Aaron Boone.

Burkett was once considered "baseball's best bowler," and has 32 perfect games to his credit. He became a PBA member in 1992 and competed in several PBA events in the 1990s and 2000s, cashing in at least two of them (at least $2,840 in prize money). He rejoined the association following his baseball career in 2005, moving to the PBA50 Tour (formerly the PBA Senior Tour) in 2015. On August 18, 2019, he won a PBA Regional Tour event in Houston, his first PBA title, shooting 247 in his final match. This was the first PBA victory at any level for a former Major League Baseball player.