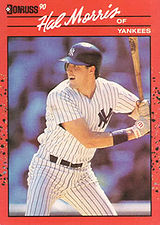 Hal Morris was one of only three players (and statistically the best) from the 8th round of the 1986 amateur draft to ever play in the big leagues. He had a very odd hitting style, taking two small steps toward the pitcher as the pitch was being delivered. It worked, though, as he averaged .304/.361/.433 over his 13 major league seasons. Primarily a first baseman, his season high for home runs was 16 for the Cincinnati Reds in 1996.

The Pittsburgh Pirates hired him as a scout in November of 2008. In 2011, he was scouting for the Boston Red Sox. In 2012 he became the head of pro scouting for the Los Angeles Angels of Anaheim.