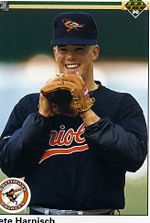 Pete Harnisch was signed as a 1st round pick in the 1987 amateur draft by the Baltimore Orioles and scout Joe DeLucca.

As a rookie for the Orioles during their 1989 "Why Not?" season, Harnisch was to start in the next-to-last game of the season with the O's trailing the Toronto Blue Jays by 2 games with two to play - just one year after a disastrous 107-loss season in which the Orioles started the year with a record 21 straight losses. However, Harnisch stepped on a nail while walking from the park to the hotel the night before his scheduled start. Dave Johnson made a spot start in his place, and left after 7 innings leading 3-1, but the bullpen blew the lead and the Blue Jays clinched the pennant with a 4-3 win.

Harnisch threw two one-hitters in 1993 when he went 16-9 for the Houston Astros. He quit using smokeless tobacco while with the Cincinnati Reds; his career declined precipitously and irretrievably afterwards.