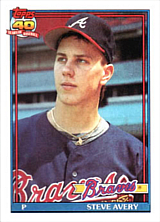 Pitcher Steve Avery signed as the third overall pick of the 1988 amateur draft by the Atlanta Braves and scout Tony Stiel and reached the majors as a 20-year-old. In just his second big league season, 1991, he went 18-8 and won his last five decisions as the Braves won the NL West title. In the NLCS, he threw 16 1/3 scoreless innings against the Pittsburgh Pirates, being named NLCS MVP as the Braves went on to the World Series. He was spoken of in the same breath as future Hall of Famers Greg Maddux, Tom Glavine and John Smoltz in those days, but alas, the "Big Three" never became a "Big Four" as he faded quickly after his initial success.

Avery became a free agent after the 1996 season and signed with the Boston Red Sox. He struggled with injuries in his first season with the BoSox but won 10 games with the team in 1998. After not pitching since 2000, Avery made a comeback with the Detroit Tigers in 2003, going 2-0 in 19 appearances out of the bullpen. His father, Ken Avery, had pitched in the Tigers minor league system in 1962 and 1963.