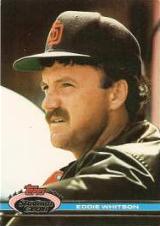 Unicoi County High School has produced only four major league draft picks, but in 1974 managed to produce two in the first 10 rounds of the draft including Ed Whitson in the 6th round. Pitching mainly as a starter Whitson had a productive, if uneven, major league career that spanned 15 years across five teams from 1977 through 1991. He amassed a 126-123 record and 3.79 ERA over his time in the bigs. When going well Whitson could be elite; he peaked with back-to-back top 5 National League ERA finishes with the San Diego Padres in 1989 and 1990. He also had tough times including his stint with the New York Yankees in 1985 and 1986 where despite a 15-10 mark his performance was poor (5.38 ERA) and led to a trade from the Yankees in mid-1986, Whitson going to the Padres in exchange for pitcher Tim Stoddard.