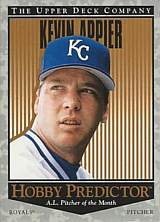 Kevin Appier was signed as a 1st round pick in the 1987 amateur draft by the Kansas City Royals and scout Guy Hansen.

He set a Kansas City Royals record in 1993 for most consecutive scoreless innings (33). That year, he won six games in a row twice. With his motion being described as "herky-jerky", Appier had an 11-2 record by late June 1995. He threw a fastball, splitter and slider. On April 26, 1995, Kevin was pulled from a game by manager Bob Boone, despite the fact that he was throwing a no-hitter. After the game, Boone stated that since it was Opening Day, he had no interest in letting his pitcher throw too many pitches.