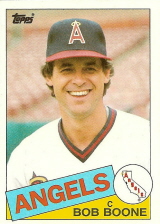 Bob Boone was a very durable catcher known for his elite defensive skills.

A star at Stanford, Bob played more games in the majors than any other player to attend. He played for the Philadelphia Phillies, California Angels, and Kansas City Royals over his 19-year career. He was the starting catcher on the great Phillies teams that won three consecutive division titles from 1976 to 1978, won the 1980 World Series, and made one more postseason appearance in the strike-shortened 1981 season. After that run, he was sold to the California Angels, where he continued to be the starting catcher from 1982 to 1988, and made appearances in the postseason in both 1982 and 1986. He was a victim of collusion in 1987, not being able to find a team willing to offer him a contract at market value and being forced to re-sign with the Angels on May 1st. He finished his career with one final year as a starter for the Kansas City Royals in 1989 at age 41, then played another 40 games in 1990, his final season.

Bob's best years at the plate came with the Phillies in 1977 and 1978, when he hit 11 and 12 homers respectively, while batting .284 and .283, and driving in over 60 runs both years. His 1973 season was almost identical, although his average was roughly 20 points lower. He never reached double-digit home runs after 1978, and usually hit below .250, although he did put up a .295 batting average at age 40 in 1988. Overall, he played 2,225 games at catcher, the third-highest total in history (behind Carlton Fisk and Ivan Rodriguez) and won seven Gold Gloves. He had played the most games ever at the position when he retired, but Fisk hung on for a few years (as a backup) in order to catch him (and in fact was given his release the day after he passed him by one game). Boone was always a starter until his last season, but Rodriguez is now well ahead of both. Boone played in the postseason seven different years and did well, hitting .311 with 2 homers. He started all but 3 games his teams played in the postseason: in the 1978 NLCS, Tim McCarver, who was the personal catcher for Steve Carlton in those years, started a game with "Lefty" on the mound, and in the 1981 NLDS, manager Dallas Green ditched some of his veterans with the Phillies on the brink of elimination and played the young Keith Moreland instead. It was a few weeks after when the Phillies sold his contract to the Angels, feeling - completely wrong as it turned out - Boone was washed up.

After he retired as a player, he was a Cincinnati Reds coach in 1994 and later managed the Kansas City Royals and the Reds without much success. He joined the Washington Nationals' front office in 2005 and became Assistant General Manager and Vice President for Player Development, a position he held starting in 2009. In 2005, Boone was inducted into the Philadelphia Baseball Wall of Fame. He resigned the position in early September of 2021 when he decided to quit rather than take the COVID-19 vaccine after the Nats had implemented a vaccine mandate for all non-playing employees.

He has the rare distinction of being the son of a major leaguer (Ray Boone) and the father of two others (Bret and Aaron Boone). Another son, Matt Boone, and Bob's brother, Rod Boone, never made it to the majors after a starring career at Stanford. Mark McLemore and Brian Dorsett played with both Bob and Bret Boone, while Dante Bichette played with both Bob and Aaron Boone. Bob made his first baseball card appearance in the 1973 Topps set.