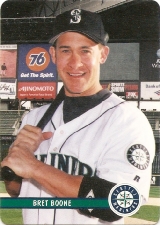 On August 19, 1992, Bret Boone became the first third-generation player in the major leagues, as he was the grandson of Ray Boone and the son of Bob Boone. His brother Aaron later joined him in the major leagues. Another brother, Matt, played in the minors as did uncle Rod.

In the minors, he was a Southern League All-Star in 1991 and a Pacific Coast League All-Star prior to his 1992 debut. He established himself as a regular upon a change of scenery to the Cincinnati Reds in 1994, batting .320 in 108 games before the strike brought the season to a screeching halt. He batted between .230 and .260 the next several seasons before exploding in 2001 with the Seattle Mariners, hitting .331/.372/.538 with 37 home runs, 206 hits, 118 runs scored and an AL-leading 141 RBI, all personal bests. On May 2, 2002, he and teammate Mike Cameron hit back-to-back home runs twice in the 1st inning, when the Mariners put 10 runs on the scoreboard; it is the only time in major league history that two teammates homered twice (and back-to-back) in an inning. Cameron went on to hit four home runs in that game, but partially because of batting behind Boone, he only had four RBI all game. Boone had good, but not nearly as good as 2001, seasons the next two years before falling off a cliff in 2005. He announced his retirement on March 1, 2006. He attempted a comeback in 2008 and hit .261 in 18 games for the Columbus Clippers before retiring once again.

Bret was hired as a FOX commentator for the 2003 World Series. It turned out that the New York Yankees made it to the Series, and Bret's brother, Aaron, was there, having been traded to the Yankees at the end of July. Aaron was a high-profile player in the Series, and Bret seemed uncomfortable talking about his brother's performance (which is only natural).

He wrote Home Game: Big-League Stories from My Life in Baseball's First Family about his life in 2016.