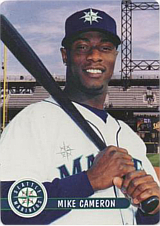 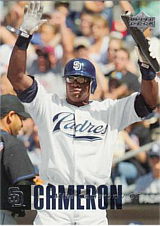 Originally property of the Chicago White Sox, who drafted him in 1991, Mike roamed their outfield from 1995 to 1995, establishing himself as a stolen base threat while failing to get much momentum going with the bat. He was dealt to the Cincinnati Reds before the 1999 season in the deal that brought Paul Konerko to the south side of Chicago. He enjoyed his first 20-home run season with Cincy, stealing a career high 38 bases, only to be a key ingredient in the deal that moved the legendary Ken Griffey Jr. to his father's old stomping grounds, joining Brett Tomko and Antonio Perez in the haul received in return by the Seattle Mariners. When the Mariners won 116 games in 2001, Mike had his finest season, crafting a .267/.353/.480 slash line with 25 home runs, 110 RBI and 99 runs scored in his lone trip to the All-Star Game. In 2002, he became the 15th man in MLB history to slug four home runs in a game, victimizing his old pals, the Chicago White Sox, in a 15-4 drubbing on May 2nd at Comiskey; all the homers were solo shots. He and Bret Boone turned a feat never matched in history in the 1st inning, when they slugged back-to-back home runs twice in the inning, taking both Jon Rauch and Jim Parque downtown, during a 10-run frame.

Following a Gold Glove 2003, Mike signed a three year deal with the New York Mets, slugging a career high 30 home runs in 2004. Following the acquisition of Carlos Beltrán for 2005, Mike moved to right field to make way for Carlos. It was under these circumstances, on August 11, 2005, that both men suffered injuries in a terrifying collision chasing down a fly ball. While Beltrán was able to return fairly quickly, Mike suffered a concussion, multiple nasal and cheekbone fractures and facial lacerations, ending his season after 76 games. The Mets dealt him to the San Diego Padres in the winter for Xavier Nady and Mike bounced back, hitting .268/.355/.482 with 22 home runs, 83 RBI, 88 runs scored and his final Gold Glove. He spent the following season in San Diego, becoming a free agent around the time news of his second positive test for a banned stimulant was announced.

The Milwaukee Brewers were undaunted by Mike's 25 game suspension, bringing him aboard to hit 49 home runs and drive in 140 runs over the next two seasons, his final two as a full-timer. He moved to the Boston Red Sox for 2010, taking over in center field and pushing Jacoby Ellsbury to left field early, but two weeks into the season, he was struck by both kidney stones and an abdominal tear. He played only 48 games, hitting .259 with 4 homers and 15 RBI. He was no longer counted on as a starter in 2011, after the Sox signed Carl Crawford to a huge contract, but his poor performance sent him even further down the depth chart. On June 30th, he was released after hitting .149 in 33 games; he was in the second year of a two-year deal worth $15.5 million. The Florida Marlins picked him up and he hit .239 with 6 homers and 18 RBI. He was again slowed by various ailments, including a hamstring injury, a sprained left wrist and sore knees. On September 12th, he struck out pinch-hitting against the Atlanta Braves and, after the game, was released.

While he was expected to retire, it was announced on December 20, 2011 that he signed a minor league contract with the Washington Nationals for 2012 with an invite to spring training. Shortly before spring training started, Cameron decided to retire. He signed a one-day contract with the Seattle Mariners to retire as a Mariner, capping the day by throwing the ceremonial first pitch before the M's 2012 home opener on April 13th. In 2020, he joined the Mariners' coaching staff as a special assignment coach, but stayed only for that season. He was still with the Mariners as a spring training instructor when he and former teammate and Mariners icon Ichiro Suzuki played the outfield in an intrasquad game on March 7th, set up to give some of the pitchers in camp some work against live batters. Neither of the elder statesmen got a hit, but they had some good cuts against men half their age.

He is the father of Daz Cameron.