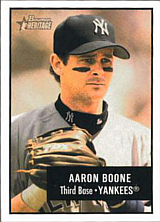 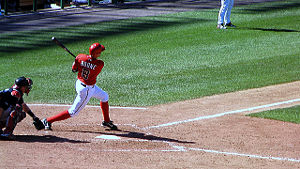 Aaron Boone was a third generation big leaguer best known for his walk-off blast against the Boston Red Sox to cinch the 2003 American League pennant for the New York Yankees. He is the grandson of Ray Boone, the son of Bob Boone and the brother of Bret Boone. He is also the nephew of Rod Boone, a legendary college player, and the brother of Matt Boone who never made the majors. In addition, his aunt Terry was a top swimmer who competed in the Olympic Trials in 1968.

Boone hit .289/~.400/.368 as the US second baseman in the 1991 World Junior Championship. He scored 11 runs to tie for second on the Bronze Medal winners. I n 1994, he stole 26 bases to set a single-season University of Southern California record. "He really reads pitchers well", said his father, Bob Boone, years later when Aaron was stealing bases well with the Reds.

While normally playing in the shadow of his more famous brother Bret from 1997 to 2002, Aaron became famous for his 7th game, 11th inning, series-ending home run off Tim Wakefield in the 2003 American League Championship Series, earning the Yankees their 39th pennant. He had started the season with the Cincinnati Reds, making the All-Star team despite mediocre numbers, and was traded to New York for pitcher Brandon Claussen at the trading deadline. When he violated terms of his contract during the offseason by getting injured while playing basketball, the Yankees released him. The injury prompted the Yanks to trade for Alex Rodriguez to take over his spot at third base.

After spending 2004 on the sidelines due to his knee, he caught on with the Cleveland Indians in 2005. He started the season very slowly: on June 3, he had the lowest batting average in the majors at .151. After that date, he hit .284 with 12 home runs and, with the team playing well, the Indians chose to keep him for 2006. In 2007 he played with the Florida Marlins as a backup corner infielder, then spent the 2008 season as a back-up with the Washington Nationals, playing almost regularly given the chronic injury problems of first baseman Nick Johnson and Dmitri Young's mediocre production. Boone ended his career with 10 games for the Houston Astros at the end of the 2009 season, a season which began with open heart surgery to repair an aortic valve. The most similar player to Boone, according to the similarity scores method, is another Yankees postseason hero: Scott Brosius.

Boone announced 2014 College World Series and 2015 College World Series games for ESPN. He worked as an analyst on Monday night MLB broadcasts for ESPN in 2015, then was promoted to the marquee Sunday Night Baseball program in 2016, joining play-by-play announcer Dan Shulman and another new analyst, Jessica Mendoza. In November 2017, he was one of the candidates interviewed to succeed Joe Girardi as manager of the Yankees and unexpectedly won the competition in spite of his lack of any coaching or managerial experience since his retirement. His communication skills and his experience of having played at a high level in the special environment that always gravitates around the team were qualities that set him apart. The appointment was made official when he was introduced by the team as their new manager on December 6th. Ironically, he was replaced as an analyst on Sunday Night Baseball by Alex Rodriguez - the man who had replaced him as the Yankees' third baseman back in 2004.

He had a very good first season in 2018, as the Yankees improved upon their breakthrough 2017. He was particularly good at juggling his lineup because of numerous injuries and integrating youngsters Miguel Andujar and Gleyber Torres into everyday roles. Unfortunately, the Boston Red Sox were having a historically good season at the same time, and began to pull away for the division lead beginning in July, meaning that as well as the Yankees had played, they were likely headed into a winner-take-all Wild Card Game at the end of the season. While generally keeping things calm in the media cauldron that is New York, he did have one epic tirade on August 31st, when he hotly disputed a strike three call, complete with crouching behind the plate and mimicking the gestures of a catcher framing the pitch. He was of course ejected, and a one-game suspension was added as it was determined that he had bumped umpire Nic Lentz during the argument. The Yankees won the Wild Card Game at home against the Oakland Athletics, but were defeated by the Red Sox in four games in the ALDS.

Boone's second season at the helm of the Yankees in 2019 was even more impressive. He had to juggle a lineup and pitching rotation beset from injuries starting in spring training, yet the team never skipped a beat, quickly building a sizable lead over the Red Sox and also distancing the resilient Tampa Bay Rays by the All-Star break. On September 19th, the Yankees clinched a division title, their first since 2012 with their 100th win of the year. Boone also became the first ever manager to win 100 or more games in his first two seasons. He guided the Yankees to the ALCS, where they fell to the Houston Astros. The challenges were different in 2020 as he had to contend with the Coronavirus pandemic which upended spring training and cut off two-thirds of the season, but he managed to get the Yankees into the postseason again, where they once again fell at the ends of the eventual AL pennant winner, this time the Tampa Bay Rays. The loss came in a hotly-disputed Division Series that went to the limit. In 2021, just as spring training was getting underway, he had to take an unplanned leave of absence to undergo emergency surgery to have a heart pacemaker inserted at St. Joseph's Hospital in Tampa, FL. It was not his first time under the knife for a heart problem, as when he was still a player in March 2009, he had undergone open-heart surgery to replace his bicuspid aortic valve. The second procedure was a more routine one, and he was expected to resume his duties rapidly, with bench coach Carlos Mendoza stepping in in the interim. He led the Yankees to the postseason for the fourth straight year that season, as the second Wild Card team in the American League, after a streaky season that saw them look awful at times, and like world beaters at others. However, they lost the Wild Card Game to the Boston Red Sox and there was speculation that he would pay the price for failing to bring the Bronx Bombers to the World Series once again. However, on October 18th, he was offered a two-year contract extension.

The 2022 season started great for the Yankees, as they were on a historic winning pace for the first two months, but things stalled with a very poor month of August and their play in September was only mediocre, leading to a 99-win season. They won their division title easily, thanks to their great start, but there was some criticism of how, apart from a historic 62-homer season by Aaron Judge, the rest of the team was underperforming. They then almost were eliminated by the Cleveland Guardians in the Division Series, which went to the limit, and their shortcomings were made apparent when they were swept by the Houston Astros in the ALCS. There was a lot of grumbling from the fan base about Boone's leadership starting in August, to the point that owner Hal Steinbrenner had to make a public statement two days after the team's elimination to state that Boone still was his man and that "I believe he is a very good manager. I don’t see a change there."

There were 19 days on which Aaron and Bret Boone each hit home runs in the major leagues. This is an all-time major league record (through 2010).