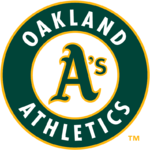 On April 17th, the 2018 Oakland Athletics staged a game featuring free admission for anyone registering in advance in order to celebrate the 50th anniversary of their first game in Oakland, CA. Over 46,000 spectators poured into the Oakland Coliseum to attend the birthday party, which ended with a 10-2 win over the Chicago White Sox. A few days later, on April 21st, Sean Manaea pitched a no-hitter against the Boston Red Sox, defeating them 3-0; it was the first no-hitter for an A's pitcher since the perfect game pitched by Dallas Braden in 2010. On June 24th, they set a major league mark with a home run in 25 straight road games, eclipsing a mark set by the 1996 Baltimore Orioles. The streak eventually reached 27 games before ending. They continued to win after that and on July 9th, they defeated the Houston Astros, 2-0, to earn their 17th win in their last 21 games. Their record was now at 51-40 and they were in the middle of the postseason race, although it was likely to be a heated one, given that in their own division, the Astros and Seattle Mariners were still ahead of them, and in the AL East, the New York Yankees and Boston Red Sox were locked in an epic battle for first place, meaning that there were five teams competing for a maximum of four available spots and the A's were still six games behind the fourth-best of these!

On July 24th, the A's pulled off a remarkable comeback win as they were trailing the Texas Rangers, 10-2, in the 6th inning before storming back to win, 13-10. This included scoring four times on just one hit in the 8th, then having Stephen Piscotty tie the game with a homer off closer Keone Kela in the 9th and Khris Davis putting the team ahead to stay with another homer, this one off Austin Bibens-Dirkx, in the 10th inning. Oakland continued to lead the majors for homers on the road at that point, having hit 92. The win went to Jeurys Familia, who had been acquired in a trade with the New York Mets a few days earlier, his second win in as many appearances for his new club.

The A's capped their remarkable climb by catching the Astros in first place with a 7-1 win on August 18th. They had made up a full ten games since July 10th and had also passed the Mariners along the way. However, they weren't able to pass the Astros and fell back a few games over the following weeks. On September 24th, they clinched a postseason slot for the first time since losing the 2014 Wild Card Game.