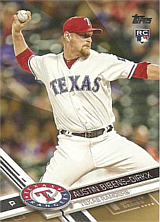 Pitcher Austin Bibens-Dirkx made his major league debut in 2017 at the age of 32.

Bibens-Dirkx was 1-5 with 7 saves in his lone season at the University of Portland. The Seattle Mariners, and scout Phil Geisler, took him in the 16th round of the 2006 amateur draft, one round before they took Dan Runzler and two rounds before Kam Mickolio. He made his pro debut that summer and did very well between the Everett AquaSox (a hit, a walk, 6 strikeouts, 0 ER in 4 innings with a save), Wisconsin Timber Rattlers (2-2, 4 saves, 1.95, 38 strikeouts in 32 1/3 innings, 0.96 WHIP) and Tacoma Rainiers (0 R in 2 innings, 5 strikeouts). He started 2007 with the High Desert Mavericks and went 3-1 with 8 saves and a 4.42 ERA in 31 games before an elbow injury shut him down for the final two months. The right-hander split 2008 between the Mavericks (1-1, a save, 7.95 in 32 games) and AZL Mariners (2 R in 8 innings) while serving two stints on the disabled list.

Austin signed as a free agent with the Washington Nationals in 2012. He appeared for the Harrisburg Senators (1-0, 2.25 in 3 games) and Syracuse Chiefs (0-3, a save, 5.59, .298 opponent average in 29 games). Released, he signed with the Colorado Rockies but was atrocious in seven games for the Colorado Springs Sky Sox (1-1, 20 hits, 12 walks in 11 2/3 innings, 13.89 ERA). He spent his third winter in Venezuela, going 2-2 with a 2.68 ERA and 57 strikeouts in 53 2/3 innings. He was second in the Venezuelan League in ERA (behind Wilfredo Boscan) and tied for third in strikeouts (57). He moved to the Navegantes del Magallanes for the finals but was roughed up for 7 hits and 5 runs in 3 innings in his lone outing. He remained with Magallanes in the 2013 Caribbean Series, starting game four against the Yaquis de Obregon. He allowed only three hits in seven innings but one was a two-run homer to Alfredo Amezaga in the first; as Rolando Valdez and his bullpen combined on a shutout, Bibens-Dirkx took a tough-luck loss.

At age 32, he finally got the call to the majors, replacing left-hander Dario Alvarez. Relieving Tony Barnette (who also had a long, round-about trip to The Show) with a 9-2 lead in the 9th against the Phillies, he hit Aaron Altherr with a pitch, struck out Tommy Joseph and retired Michael Saunders on a pop-up. Maikel Franco singled in Altherr but Daniel Nava lined out to end the game. In his second big league start on June 11th, he faced the Washington Nationals and it was his opponent on the mound, Max Scherzer, who got all the headlines, as he recorded the 2,000th strikeout of his career. Austin got the last laugh as he allowed just 3 hits in 7 innings and received credit for the Rangers' 5-1 win, his second one, as he had won a game in relief in his previous appearance on June 6th, a 10-8 defeat of the New York Mets for his first career win. He won again on June 24th when he defeated the New York Yankees, 8-1, pitching seven innings. In 24 games (6 starts), Austin was 5-2, 4.67 with a 20/38 BB/K ratio in 69 1/3 innings.

On June 20, 2018, he formed one half of the first-ever hyphenated battery in major league history when he pitched to rookie Isiah Kiner-Falefa, who was making his first start at catcher for the Rangers. His big league time was more abbreviated. He made 13 appearances (6 starts) while pitching to a 6.20 ERA and 1.56 WHIP, allowing 9 home runs in 45 innings. He became a free agent after the season and signed a deal with the Uni-President Lions of the Chinese Professional Baseball League for 2019 (2-5, 5.28 in 8 games). He requested his release in June to come back home and be with his wife for the birth of their child. The Rangers re-signed him to a new minor league deal on his return, but he scuffled in 8 AAA starts for the Nashville Sounds, finishing with a 7.98 ERA.