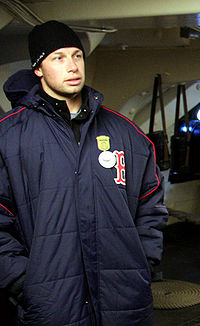 Daniel Nava hit a grand slam on the first pitch thrown to him in the major leagues.

It had been a long way to the major leagues for Nava, who went undrafted out of high school and did not receive a scholarship to attend Santa Clara University; in fact, he started out as an assistant equipment manager, with his main duties being to take care of the laundry, in order to earn money to pay for his studies. He transfered to the College of San Mateo after a year, where he got a chance to play, and returned to Santa Clara for his senior year, finally earning a playing slot with the varsity team. Not surprisingly, he did not draw any attention from major league teams following his graduation, but he did find a spot with the Chico Outlaws of the independent Golden Baseball League; in 2007, he was the league's Most Valuable Player, hitting .371 with 23 doubles and 12 homers in 72 games, earning him a contract with the Boston Red Sox. His signing bonus was $1.

Nava started out in Organized Baseball with the Lancaster JetHawks of the California League in 2008, where he hit .341 with 27 doubles and 10 homers, albeit in a very friendly hitting environment. He led the league in average, .018 over Carlos Santana. He then moved to the Salem Red Sox of the Carolina League in 2009, where he continued to hit well, batting .339 in 29 games. That earned him a mid-season promotion to the Portland Sea Dogs of the AA Eastern League. The jump in caliber did not faze him, as he hit .364 with an outstanding .479 OBP in 32 games. He had to fight for playing time as he was still not considered a prospect. In 2010, he moved up to the International League's Pawtucket Red Sox and got plenty of playing time in the early going when injuries to Boston outfielders Jacoby Ellsbury and Mike Cameron brought two of Pawtucket's regular outfielders to "The Show". Nava responded well to the opportunity offered him, batting .294/.364/.492 in 54 games in his first taste of AAA ball. When Jeremy Hermida also suffered a rib injury in June, Nava was the one called up to Boston, and he made his debut count, hitting a grand slam on the first pitch he saw off Joe Blanton of the Philadelphia Phillies on June 12, 2010. He added another hit in 4 at-bats as the Red Sox won handily, 10-2. He was the first player to hit a grand slam in his first at-bat since Kevin Kouzmanoff had done it with the Cleveland Indians in 2006 and only the fourth in baseball history to do so. Ironically, one of the others was Hermida, who Nava replaced on the Red Sox roster. He did not stop his heroics with his first game. Playing regularly in the outfield in his first week in the majors, he hit a solid .381, with 4 runs and 6 RBI, having 3 multi-hit games over his first 5. He finished the season with a .242 average in 60 games with the one homer and 26 RBI.

Nava was sent to Pawtucket to begin the 2011 season, but hit poorly. He was batting only .192 with no homers in 35 games on May 20 when he was designated for assignment as the Sox needed to make room on their roster to add his Pawtucket teammate, Drew Sutton. However, as no other team was interested in his services, he stayed with the Pawsox, and ended up playing 121 games as the regular left fielder, with a .268 average, 27 doubles and 10 homers. He was back in Pawtucket to start 2012, and hit .316 in his first 27 games, when the Red Sox were felled by another rash of injuries, as had been the case two years before. He made his return to the big leagues on May 10th, then played regularly as the starting left fielder. As had been the case in 2010, he was red hot at first, batting over .500 in his first 6 games as the Red Sox surged from the bottom of the standings in the AL East after a rough start. The team's surge was short-lived, as the team ended up in last place, but he did play 88 games, with a batting line of .243/.352/.390, almost identical to his results two years earlier.

Nava kept his job as Boston's primary left fielder at the start of the 2013 season, in spite of significant changes of personnel and a push by rookie Jackie Bradley to take his job. As was now his custom, he got off to a hot start, hitting .333 with 3 homers and 11 RBI in his first 11 games. His next game, on April 20th, was Boston's first home date since the tragic bombing at the Boston Marathon a week earlier. He hit the key blow in that emotional contest, a three-run homer to right field off Kelvin Herrera in the bottom of the 8th inning that gave Boston a 4-3 win over the Kansas City Royals. He ended up hitting .303 in 134 games, the 8th best batting average in the American League. He also hit 29 doubles and 12 homers while drawing 51 walks for an OPS+ of 128. Still, he ended up sharing playing time in left with veteran Jonny Gomes and in right with Shane Victorino, and those two got most of the playing time in the postseason. He saw some use in all three rounds of the postseason, though, including going 2 for 14 with a double and 2 RBI in Boston's defeat of the St. Louis Cardinals in 6 games in the 2013 World Series.

2014 was a different story for Nava however. He was unable to contribute with the bat in the early going and was hitting an awful .130 after 22 games when he was ceded to Pawtucket on May 31st. But he barely had time to turn around, as the Sox called him back the next day when Mike Carp went on the disabled list with a fractured foot. He played 113 games, and his bat recovered as he finished with a .270 average, although he hit only 4 homers and drove in 37 runs. In 2015, however he hit only .152 in 29 games for Boston. he was out two months, from late May to late July, because of a thumb injury, playing 120 games on a rehabilitation assignment in Pawtucket during that stretch. On July 30th, he was designated for assignment then a week later was picked up on waivers by the Tampa Bay Rays. He hit a bit better in 31 games for the Rays, at .231 with 1 homer and 3 RBIs, but it wasn't enough to land a longer-term job with the team.

Nava became a free agent after the 2015 season and on December 16th signed a contract with the Los Angeles Angels of Anaheim. In spite of coming off two rather disappointing seasons, the Angels gave him a chance in spring training in 2016 to compete for the starting left field job that had not been properly filled since Josh Hamilton's acrimonious departure a year earlier. He made the team but hit just .235 in 45 games, with just one homer, and at the end of August he was sent to the Kansas City Royals in return for future considerations. He got into just 9 games with the Royals, going 1 for 11. After that lost season, he bounced back well in 2017 after signing as a free agent with the Philadelphia Phillies. He played 80 games and hit .301 with 4 homers and 21 RBIs, good for an OPS+ of 118. He played mainly in left field, although he gave up the position to top prospect Rhys Hoskins when he was promoted in early August, and was mainly a pinch-hitter and occasional right fielder after that. His season ended on September 3rd because of a lower back strain.

Nava joined the Pittsburgh Pirates in 2018 and was hoping to compete for the outfield spot left vacant by the trade of Andrew McCutchen. However, the back pain resurfaced during spring training, which he was attending as a non-roster invitee and on February 27th, he underwent surgery, putting him out of action for 10 to 12 weeks. In the meantime, the Pirates had acquired OF Corey Dickerson via trade, so it was likely that the window of opportunity that had briefly been open for him would be closed by the time he was ready to return. Nava finished his playing career with the Kansas City T-Bones in 2019.

Nava was a coach for the ACL Dodgers in 2021 and bench coach of the Rancho Cucamonga Quakes in 2022.