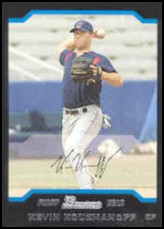 Kevin Kouzmanoff is one of three players in major league history to hit a grand slam in his first at-bat, and the only one to hit one on the first pitch he saw in the major leagues. On September 2, 2006, shortly after he joined the Cleveland Indians, he was batting 7th as the designated hitter. In the 1st inning he hit the home run off of the Texas Rangers' Edinson Volquez. His grand slam was the only hit he got as he went 1-for-4.

He was drafted by the Cleveland Indians in the sixth round of the 2003 amateur draft and signed by scout Don Lyle. He was sent to the Mahoning Valley Scrappers, where he appeared in 54 games, hitting .272/.342/.437 with a team-high 8 home runs. He led New York-Penn League third baseen in fielding percentage (.964) and assits (126).

In 2004 he was with the Lake County Captains of the South Atlantic League, impressing with a .330/.394/.526 line, and came up for 7 games with the Akron Aeros at the end of the year. He was second in the SAL in average, behind only Brandon Moss, hit 35 doubles and 16 homers and made the league All-Star team as a utility infielder

In 2005 he was in 3 games at Mahoning Valley on a rehab assignment, but spent the bulk of the year with the Kinston Indians of the Carolina League, where he hit a solid .339/.401/.591, winning player of the week honors several times. He only played 68 games due to injuries or he would have ranked second in the league in batting average behind Leo Daigle. Baseball America again did not name him one of the top 20 prospects in his league.

He had some injury problems in 2004-05, which limited his playing time, and as a third baseman he might have been unhappy when the Indians traded to get Andy Marte. However, Kouzmanoff went out and hit over .400 for the first part of the 2006 season in Akron, where his manager, Tim Bogar, said of him:

"... he's one of the best right-handed hitters I've seen in a long time. He adjusts very quickly. He doesn't swing at two bad pitches in a row. He's got tremendous hand-eye coordination. That's apparent by how often he hits balls hard. . . he's got a very compact and efficient swing, one that we would consider low maintenance."

Kevin was then dealt with Andrew Brown to the San Diego Padres in exchange for Josh Barfield.

Kouzmanoff's batting line for the Padres in 2009 was .255/.302/.420 and his OPS+ remained steady at 98. He had 31 doubles, 18 home runs and 88 RBI. He ground into 25 double plays, tying Hunter Pence for third in the circuit behind Miguel Tejada and Yadier Molina. The big improvement was once again on defense, as his error total fell to only 3 and his .990 fielding percentage set a new record for a NL third baseman, breaking Vinny Castilla's 5-year-old record.

Kouzmanoff was traded to the Oakland Athletics on January 16, 2010, along with 2B Eric Sogard in return for Aaron Cunningham and Scott Hairston. He was the starter at 3B for the A's that season, playing 143 games in which he hit .247/.283/.396. His OPS+ dipped to 84 as a result, even though he still exhibited decent power with 32 doubles, 16 homers and 71 RBIs. His inability to get on base consistently was a problem for the A's, however, and when things got even worse early in the 2011 season, he was sent away. He was hitting .227 with an OBP of .262 after 46 games when he was sold to the Colorado Rockies on August 23rd. By then, Scott Sizemore had taken over the starting job at third base. He improved slightly in 27 games for the Rockies, to .255/.315/.398. He then spent the next two seasons in the minor leagues, trying to earn a ticket back to the Show. In 2012, he played in AA and AAA in the Kansas City Royals organization, hitting a combined .276 with 25 doubles but only 2 homers in 90 games. In 2013, he was with the New Orleans Zephyrs, AAA affiliate of the Miami Marlins and hit .294 in 60 games, with 14 doubles, 6 homers and 42 RBIS.

Kevin moved again before the 2014 season, this time signing with the Texas Rangers. With Adrian Beltre manning the hot corner in Arlington, it was clear the signing was only for depth, but it turned out to be a wise move for Texas when Beltre went down with an injury the second week of the season. Kouzmanoff was hitting .313 after 4 games with the Round Rock Express and made his first big league appearance in three years on April 9th, when he singled as a pinch-hitter for Josh Wilson in a game against the Boston Red Sox. With the Rangers struggling to score runs, manager Ron Washington decided to give Kevin a chance to start in place of Wilson, a career utility infielder with a weak bat. Given the opportunity to play, he got off to a red hot start, getting a hit in his first 6 games, including his initial pinch-hitting appearance. On April 15th, he hit his first homer since his return, following another long ball by Prince Fielder against Blake Beavan of the Seattle Mariners. He added a pair of doubles in the 5-0 win, and at the end of the day was batting .450 with a slugging percentage of .750. He was named the AL's Player of the Week, but the fairy tale soon ended as Kevin felt pain in his back. An epidural shot failed to ease the pain, and he now faced back surgery, nipping his comeback in the bud. "It's bad timing," Kouzmanoff said of his injury. "It was fun ... I was having fun winning."

Kouzmanoff became a coach with the Midland Rockhounds in 2021 and Stockton Ports in 2022.