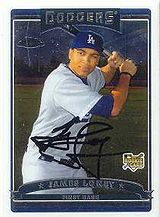 James Loney was a pitcher and first baseman in high school and was selected by the Los Angeles Dodgers in the first round of the 2002 amateur draft. He was signed by scout Chris Smith and made his pro debut that summer, hitting .317 with 22 doubles for the Great Falls Dodgers of the Pioneer League. The next season, he advanced to A, where he hit .276 with 7 homers. In 2004, he struggled at AA, hitting just .238. He spent the following year in AA again, but in 2006, Loney made his big league debut with the Dodgers. He was rated the #12 prospect in the Pacific Coast League by Baseball America.

Loney made his mark by slugging .559 as a rookie in 2006 with the Los Angeles Dodgers. Loney's rookie season was highlighted by a 9 RBI day (September 28) at Colorado. He wound up the year batting .284 with 4 HRs and 18 RBIs in 102 plate appearances. However, he was sent to the minors at the end of spring training in 2007 after being told there wasn't a spot for him on the team. Nomar Garciaparra was playing first while Andre Ethier and Luis Gonzalez were set for the outfield corners. Loney was sent to Las Vegas to play, and he suggested that perhaps he could be traded. After some time in Las Vegas, he was brought back to the Dodgers, and in 2007, he hit .331 with a .538 slugging percentage in 96 games.

On August 25, 2012, Loney was the only established major leaguer which the Dodgers sent to the Boston Red Sox in one of the biggest blockbuster trades in baseball history. The Dodgers took on $260 million in future salary that day when they acquired 1B Adrian Gonzalez, P Josh Beckett, OF Carl Crawford and IF Nick Punto. Loney was having a very poor season for the Dodgers, hitting a mere .254 with 4 homers and 33 RBI in 114 games, and the four prospects who joined him on the way to Boston - Ps Rubby De La Rosa and Allen Webster, IF Ivan DeJesus and OF/1B Jerry Sands - were the key to the deal. Loney had to take over for Gonzalez as the Sox's first baseman, with the understanding that there was almost no chance that his services would be retained by Boston beyond the end of the current season. Indeed, he hit only .230 with 2 homers and 8 RBI in 30 games with the Red Sox, who made no effort to re-sign him after the season. On December 3rd, the day Boston signed Mike Napoli to be its new first baseman, Loney inked a one-year deal with the Tampa Bay Rays for $2 million, with no guarantee of receiving regular playing time in 2013.

Loney found his stroke back with the Rays in 2013. After 42 games on May 18th, he was hitting .359 and had 19 runs scored and 21 RBI, even though he had hit only three homers. His batting average was second in the American League to Miguel Cabrera. He could not keep up his torrid pace all season, but still had a very solid year at the plate combined with his usual stellar defense at first base. On September 23rd, with the Rays working to clinch the first wild card spot in the AL, he had one of the team's most important hits all year, a walk-off 9th-inning pinch-hit homer off the Baltimore Orioles' Tommy Hunter that gave the Rays a key 5-4 win. He finished the season at .299/,348/.430, posting a 118 OPS+; he had 33 doubles and 13 homers. In the postseason, he went 1 for 4 and scored a run as the Rays defeated the Cleveland Indians in the Wild Card Game, then was 5 for 12 (.417) with a pair of doubles when the Rays lost to the Red Sox in the ALDS. Having found a good home in Tampa Bay, he re-signed with the team after the season, his good year resulting in a three-year deal for $21 million announced on December 13th and formally completed on January 3, 2014.

In 2014, Loney played 155 games for the Rays and hit .290 with 9 homers and 69 RBIs while scoring 59 runs. However, big changes were in the offing for the team after the season, as long-time GM Andrew Freedman and manager Joe Maddon both left for greener pastures. Under new manager Kevin Cash, Loney was no longer an every day player in 2015, as he shared playing time at first base with a number of other players, including career middle infielders Jake Elmore and Logan Forsythe. In 104 games, he hit .280 with 4 homers and 32 RBIs. However, in spite of the relatively good batting average, his decrease in power had made him a below-average offensive player, as his OPS+ was down to 89. He was at his best in Tampa Bay's historic visit to Havana, Cuba to play the Cuban national team in an exhibition game on March 22nd. He drove in the game's first run with a single in the 2nd inning and then hit a two-run homer in the 4th to propel the Rays to a 4-1 win. In spite of his heroics in that game, however, he was released by the Rays on April 3rd. He signed with the San Diego Padres and spent the first weeks of the season back in the minors with the AAA El Paso Chihuahuas. He was hitting a scorching .342 with 28 RBIs in 42 games when on May 28th, his contract was purchased by the New York Mets, who had just placed starting 1B Lucas Duda on the disabled list. He proved to be a very valuable addition, given that Duda was in effect lost for the rest of the season. In 100 games, he hit .265 with 9 homers and 34 RBIs, while playing solid defence. His OPS+ was below average, at 87, but he kept the Mets from having a complete black hole at a key offensive position, putting the team in a position to make a successful postseason push at the end of the season. He started the Wild Card Game at first base against the San Francisco Giants on October 5th and went 0 for 1 with an intentional walk before giving way to pinch-hitter Eric Campbell in the bottom of the 8th. The whole Mets' line-up was stymied by Madison Bumgarner that day, as the Mets lost, 3-0.

Loney was a free agent again after the 2016 season and on January 24, 2017, he signed a one-year minor league contract with the Texas Rangers coupled with an invitation to spring training. However he failed to make the team and was released on March 27th. He then signed with the Detroit Tigers, who were concerned about the health of Miguel Cabrera, but he hit only .229 with 1 extra-base hit in 16 games with the AAA Toledo Mud Hens and was released again. When the Atlanta Braves' firs baseman, Freddie Freeman, suffered a broken wrist a week later, he was quickly signed and sent to the Gwinnett Braves on May 18th, but four days later, after going 1-for-7 in 2 games, he asked and received his release: in the meantime, the Braves had traded for another first baseman in Matt Adams and it was clear that James's services would no longer be required by the big league club.