Nomar Garciaparra was a major star and one of the greatest shortstops of his era. Most of his major league career was spent with the Boston Red Sox, for whom he was a five-time All Star and American League batting champ in 1999 and 2000. Through 2005, his career batting average was .320 over 10 seasons. In 2006 with the Dodgers he was again among the league leaders in batting average, finishing the season with a .303 average. He spent the final year of his career with the Oakland Athletics before signing a one-day contract with Boston in 2010 to retire a member of the Red Sox.

A major star in college at Georgia Tech, Garciaparra played on the 1992 Barcelona Olympics baseball team. He was then a 1st round pick by the Red Sox in the 1994 amateur draft, but his minor league stops in Sarasota, Trenton, and with the Gulf Coast Red Sox from 1994-1996, while decent, did not make it obvious that he would be a tremendous major league star. However, he blossomed in 43 games in 1996 with Pawtucket in the International League where he posted .343/.387/.733 with 16 homers, and got a ticket to the majors.

Prime years in the majors[edit]

He then played for the Boston Red Sox from 1996 to 2004, when he was traded to the Chicago Cubs at the trading deadline in 2004 in a four-team trade that sent Orlando Cabrera to the Red Sox. He won the 1997 American League Rookie of the Year Award and finished second in the 1998 American League MVP voting.

He was the first player to drive in runs in his first five playoff games; Pedro Alvarez later tied then broke the mark in 2013. Garciaparra held the record for fewest games (869) to reach 2,000 total bases, but this record was broken in 2006 by Albert Pujols.

Later years with the Red Sox and with the Dodgers[edit] 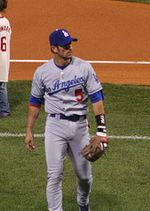 From 2001 to 2005, though, he did not hit above .310 and struggled with injuries. He recovered after moving to the Los Angeles Dodgers in 2006, winning the National League's Comeback Player of the Year Award after playing in 122 games, but he injured himself again during the post-season, which limited him to a pinch-hitting role after the second game of the NLDS. In March of 2010, he signed a one-day contract with the Red Sox in order to retire with the team.

He has played more games than any other major leaguer from Georgia Tech (which has contributed 38 players to the major leagues), except for Del Pratt.

His unique name comes from his father. Anthony is his given first name, his middle name Nomar is the reverse of his father's name, Ramon. His brother, Michael Garciaparra, was a minor leaguer infielder from 2002-2010.