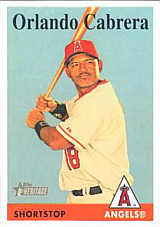 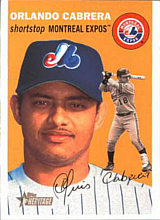 Colombian shortstop Orlando Cabrera was a two-time Gold Glove winner and a valuable contributor to the Boston Red Sox team that ended 86 years of frustration with a World Series title in 2004. He is the brother of Jolbert Cabrera and son of big league scout Jolbert Cabrera Sr., who was responsible for signing Edgar Renteria to the Florida Marlins.

Orlando was signed by the Montreal Expos in 1993, two years after brother Jolbert joined their system, and made his pro debut the following summer with the GCL Expos, hitting .315 in 22 games. He spent most of 1995 with the Vermont Expos, where he hit .282 with 5 triples. With the Delmarva Shorebirds in 1996, he earned a spot on the South Atlantic League All-Star team by hitting .252 with 14 homers, 65 RBIs, and 51 stolen bases. After stops at A, AA, and AAA in 1997, Cabrera earned a September call up, becoming the fifth Colombian-born player to reach the majors. He made his debut on September 11th against the Boston Red Sox, got his first hit off Rick Reed of the New York Mets on September 9th, and made his first big league start on September 22nd versus the Atlanta Braves. In 1998, he began the season with the Ottawa Lynx, with whom he stole 19 bases, before being called up in June when Mike Mordecai went on the disabled list. He quickly became the team's regular second baseman and hit over .300 in his first month. On July 21st, he hit his first home run, an inside-the-park round tripper, off Mark Portugal of the Philadelphia Phillies, and on July 30th, he hit a pair of triples in a game against the San Francisco Giants, tying a club record. The following day, regular shortstop Mark Grudzielanek was traded the the Los Angeles Dodgers, and Cabrera became the Expos' everyday shortstop.

Cabrera remained a regular with the Expos in 1999 and had a 42 game errorless streak at shortstop at one point. His season was ended by a severely sprained ankle on August 8th. He hit 13 homers in 2000, despite missing a month with a separated shoulder. In 2001, he had his first really solid season, hitting .276 with 14 home runs and 96 RBI while earning a Gold Glove and appearing in all 162 games. His numbers fell off in 2002, but he still managed to hit 43 doubles and steal 25 bases. He bounced back the next year, 2003 with what was the best season of his career. He set career bests in batting average (.297), homers (17) and doubles (47), while once again playing in every Expos game. Interestingly, for a player who was thought of as a typical singles-hitting middle infielder when he started in the majors, he was regularly being used as the Expos' clean-up hitter against left-handed pitchers and did very well in the role. In fact, he was used all over the batting order, from lead-off hitter to 8th during his time with the Expos, and had a great ability to adjust his batting style to the task, being more patient and drawing walks when hitting lead-off, working to move the baserunner along when batting second, going for more power when hitting third or fourth, and playing a balanced game when hitting lower in the order. These were among the little things than made him a much more valuable player than appeared superficially in his statistics. Also of value were his excellent base running instincts, including a very high stolen base percentage (his high water mark came in 2003 when he stole 24 bases and was only caught twice). He was not a flashy spectacular fielder, but he was extremely reliable with excellent range. He was also one of the last great artificial turf shortstops in history, mastering the tricky surface of Stade Olympique like no one else ever had. It is no coincidence that the Expos had outstanding winning percentages at home while he was at his peak and he was truly a cornerstone of the floundering franchise.

In 2004, Cabrera hit .246 in 103 games with the Expos before being traded to the Boston Red Sox to replace Nomar Garciaparra as the team's shortstop. He had been extremely disappointed that the Expos - under instructions from Major League Baseball, which owned the team by that point - were instructed not to discuss re-signing him, or his good friend Vladimir Guerrero, who left after the 2003 season without even being offered salary arbitration. Both Cabrera and Guerrero liked Montreal and did not wish to leave, although the writing was on the wall for the franchise. It was clear that he was not playing with much enthusiasm during the first half, but things changed after the trade. In his first plate appearance for the BoSox on August 1st, he smashed a home run off Johan Santana of the Minnesota Twins, and overall, he hit .294 in 58 games for the club. He played every game in the postseason, hitting .379 in the ALCS, as the Red Sox won the World Series.

In the glow of the championship, Cabrera became a free agent and signed with the Los Angeles Angels of Anaheim, linking up again with his friend Guerrero. He hit .257 with 8 home runs and 57 RBI in 2005. Cabrera was on the team that defeated the New York Yankees in the postseason in both 2004 and 2005; he was the first player to beat the Yankees in two straight postseasons since the New York Giants beat them in 1921 and 1922. He improved to .282 with 9 homers and 82 RBI in 2006, while reaching base safely in an Angels record 63 straight games. He hit .301 for the team in 2007 and earned his second Gold Glove award. Following the season, he was traded to the Chicago White Sox for pitcher Jon Garland. He then began the nomadic phase of his career. If his talent had been a bit of a well-kept secret in Montreal, it was no longer the case anymore, after his contributions to the Red Sox's first World Championship in 75 years and a series of very good Angels teams. His services were sought by a string of teams who were one or two players away from contention, and Cabrera would provide that additional touch with his multi-faceted contributions on the field and veteran leadership in the clubhouse. With the White Sox in 2008, he hit .281 and scored 93 runs from the top of the lineup, collecting 186 hits and 56 walks as the team won the AL Central title in a one-game playoff against the Twins. A free agent again, he was sought out by the Oakland Athletics, who were poised to make a run in the AL West. He hit .280 in 101 games and, when it turned out the team was not as good as expected, he was traded to the Twins, who needed to strengthen their middle infield in a run for the postseason. He continued to hit well in the Metrodome, .289 in 59 games, for an overall batting line of .284/.316/.389, with 36 doubles, 83 runs and 77 RBI. The Twins ran into the New York Yankees juggernaut in the ALDS.

2010 again saw Cabrera wear a new uniform, this time the Cincinnati Reds. The young team was not expected to compete, but with first baseman Joey Votto having an MVP year and Cabrera providing the glue that held the infield together, they ended up winning the NL Central for the first time since 1995. Missing some time with an injury, he played 121 games at shortstop, hitting .263 from the bottom of the batting order. That year, he set a record by reaching the postseason with different teams in four consecutive seasons: the Angels in 2007, the White Sox in 2008, the Twins in 2009 and the Reds in 2010. Unfortunately, he did not do particularly well in any of those postseasons, as his teams bowed out in the first round all four years, with Orlando never collecting more than three hits. In 2011, he started the season with yet another team, the Cleveland Indians. He was moved to second base, as the Indians had Asdrubal Cabrera (no relation) to man shortstop. He adjusted quickly, being involved in a triple play in his first week, but hitting only .244 in 91 games. Still, the Indians got off to an unexpected hot start and led their division most of the first half with Cabrera again receiving kudos for helping a young team jell and holding the infield together. The team slowed down by the All-Star break, and with young second baseman Jason Kipnis ready for a promotion, Orlando was traded one last time, to the San Francisco Giants, for outfield prospect Thomas Neal on July 30th. The defending World Champions were beset by injuries and getting little production from shortstop Miguel Tejada, whose age was starting to show. Orlando went back to his familiar position for 36 games to complete the year, but he was also running out of steam. He hit .222 for the Giants as the team fell well short of the Arizona Diamondbacks. The Giants made no effort to bring him back, and on January 18, 2012, he announced on a Colombian radio station that he was retiring after 15 seasons and almost 2,000 games played.

Orlando was a very good player for almost all of his fifteen seasons and a key part of a large number of winning teams. Yet he never made an All-Star team. Many of his contributions were subtle, but he was much appreciated by his managers and teammates as a player who understood the game thoroughly and always played smart. Upon his retirement, he became the record holder for most doubles (459) among all players to never make an All-Star Game in the All-Star era.