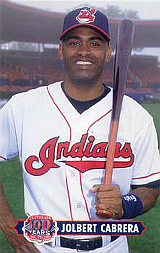 Jolbert Cabrera was a man of many hats, playing many positions and with many teams during a professional career spanning from 1991 to 2012.

Much like his brother, Orlando, Jolbert began his career in the Montreal Expos system as a middle infielder, making his big league debut as a utility man after joining the Cleveland Indians as a minor league free agent before the 1998 system. He played a career best 141 games with the 2001 Tribe, becoming a 1.000 career postseason hitter with a pinch hit single off John Halama of the Seattle Mariners in the 2001 ALDS. A move to the Los Angeles Dodgers in 2002 proved quite fortuitous in 2003 when Jolbert enjoyed his finest season, hitting .282/.332/.438 in 128 games. Following a similar season with the Mariners in 2004, he headed to NPB for two seasons, belting 14 home runs total while hitting .281/.339/.402 in 221 games with two teams. He returned to the States in 2007, seeing his final action with the Cincinnati Reds in 2008, hitting .252 in 48 games. He finished his career in a brief stint in the Mexican League in 2012. In 609 big league games, he played every position but pitcher and catcher, with 50 games at six different positions.

Jolbert and Orlando are the sons of scout Jolbert Cabrera Sr., who was responsible for signing Edgar Renteria for the Florida Marlins. Jolbert Jr. became a coach with the AZL Reds in 2014 and Billings Mustangs in 2015. He coached for Colombia when they won one of the 2017 WBC Qualifiers to win a trip to the 2017 WBC, their first WBC trip. Moving to the San Francisco Giants' chain, Cabrera was a coach for the AZL Giants in 2016. He became a manager with the Salem-Keizer Volcanoes in 2017 and Augusta GreenJackets in 2018 and was fundamentals coach for the Sacramento River Cats in 2019. He was scheduled to return to Sacramento in 2020 before the season was cancelled due to Covid-19.