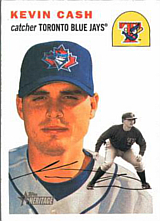 A limited-duty, part-time catcher, Kevin Cash's career batting average (.183) and on-base-percentage (.248) in 246 games (641 at bats) were two of the worst in modern major league history. A skilled receiver. he rode his catching abilities throughout eight big league seasons, playing for four of the five AL East clubs. He was also used as an emergency pitcher on a few occasions.

Cash started his post-playing career in 2012 as a major league advance scout for the Cleveland Indians. In 2013, he was named bullpen coach of the Indians. After the 2014 season, he was one of three finalists for the job of manager of the Texas Rangers, but lost to Jeff Banister. A few weeks later, on December 5th, he was hired by the Tampa Bay Rays to replace Joe Maddon in 2015; Don Wakamatsu was the other finalist for the job. After a couple of sub-.500 seasons, Cash guided the Rays to a 90-72 record in 2018 and a 96-66 mark in 2019, bowing out in the Division Series after winning the Wild Card Game. Cash and the Rays went one step further in 2020, losing the World Series to the Los Angeles Dodgers in six games. These records were especially remarkable considering Tampa Bay's routinely revolving door roster born out of a refusal to pay salaries inflated by major league experience.

He was named Manager of the Year in the American League for this work, and repeated in 2021 when he led the Rays to 100 wins in the regular season before bowing out to the Boston Red Sox in the Division Series. That Rays team was remarkable due to how little contribution he received from his starting pitchers, something more common to teams finishing well back in the second division. He compensated with an aggressive usage of the bullpen, including obtaining saves from a record number of different pitchers. However, that lack of strong starting came back to bite the Rays in the postseason, contributing to their early exit. In 2022 Cash led the Rays to the playoffs again, this time as a wild card entrant.