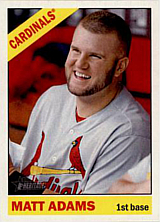 Adams was All-State in high school. In 2007, he hit .421, leading the PSAC. He also led with 24 doubles, a school record. The National Collegiate Baseball Writers Association picked him a third-team All-American. He improved to .438 in 2008 and was a second-team All-American. As a junior, Matt batted .495/.566/.853 with 64 runs scored and 64 RBI in 51 games. Daktronics named him the NCAA Division II Player of the Year after leading the nation in average. He set a school record for average, tied the record for hits (91), tied his own doubles record, set a new slugging record, fell two shy of the homer record (16) and fell two shy of the runs scored record. The American Baseball Coaches Association picked him second-team All-American at catcher for Division II. The St. Louis Cardinals took the big backstop in the 23rd round of the 2009 amateur draft. He was signed by scout Brian Hopkins.

Adams had a great pro debut. His first time at the plate as a pro, he went deep. He went on to hit .355/.400/.574 between the Johnson City Cardinals and Batavia Muckdogs, with 10 home runs and 52 RBI in 63 games while making the transition to first base. Had he qualified, he would have led both the Appalachian League and New York-Penn League in batting average. In 2010, Matt was assigned to the Quad Cities River Bandits, where he hit .310/.355/.541 with 41 doubles, 22 home runs and 88 RBI. He was 6th in the Midwest League in average (between Sean Ochinko and Scooter Gennett), doubles (tied for third with Vinnie Catricala), homers (tied for second with Khris Davis, one behind Nick Franklin), extra-base hits (63, 1st), RBI (1st by one over Justin Bour and Chris Dennis), total bases (251, 2nd to Brian Cavazos-Galvez), slugging (1st by 21 points over Cavazos-Galvez) and OPS (3rd behind Jason Hagerty and Davis). He was 5th in the St. Louis chain in runs, led in doubles (6 over Alex Castellanos), tied for second in home runs (2 behind Steven Hill), was second in RBI (4 behind Hill), led in slugging and led in total bases (18 over Matt Carpenter). He was the MWL All-Star first baseman; Mike Trout was MVP. Baseball America did not put him on their list of the league's top 20 prospects.

In 2011, he hit .300/.357/.566 with 32 dingers, 80 runs and 101 RBI for the Springfield Cardinals. He was on the Texas League leaderboard in RBI (1st, 7 over Luis Jimenez), slugging (1st, .004 over Castellanos), homers (2nd, 1 behind Tim Wheeler), total bases (262, 38 behind Wheeler, 2nd), OPS (3rd behind Trout and Castellanos), extra-base hits (57, 4th), runs (tied for 6th with Mike Bianucci) and average (6th, between Jimmy Van Ostrand and Chris Swauger). He was named the league All-Star first baseman and Player of the Year. He also led Cards minor leaguers in homers (4 over Nick Stavinoha) and slugging and was second to Stavinoha in both RBI and runs. Baseball America listed him the circuit's 19th best prospect, between Joe Wieland and J.D. Martinez. He then hit .250 with 4 homers and 19 RBI in 20 games for the Peoria Javelinas of the Arizona Fall League.

Matt batted .329/.362/.624 with 18 homers in 67 games for the 2012 Memphis Redbirds. He also saw time in the majors. He singled off Chad Billingsley in his first MLB at bat and took Chad Qualls deep for his first homer. He hit .244/.286/.384 with two homers in 86 at-bats for the Cardinals in 2012. He missed time with injury and needed shoulder surgery to remove bone chips in his elbow, ending his season early. Playing first base for the Cardinals on September 4, 2013, Adams became the second player that season to hit two extra-inning homers in one game. He broke out of an 0-for-17 slump by taking Alfredo Simon of the Cincinnati Reds deep in the 14th, only to see the Reds score a run in the bottom of the inning to tie the game at 4. In the 16th, he homered again, off Logan Ondrusek, with what proved to be the winning run in a 5-4 game, the longest of the year for both teams who were battling each other for a wild card slot. John Mayberry of the Philadelphia Phillies had also accomplished the feat on June 4th, but before that, it had not been done since Mike Young of the Baltimore Orioles in 1987. He hit .284/.335/.503 with 17 homers, 46 runs and 51 RBI in 319 plate appearances over 108 games for the 2013 Cardinals for a 131 OPS+. Despite not being a starter, he was third on the team in home runs behind Carlos Beltrán and Matt Holliday. The slugger saw extensive action when Allen Craig was out with injury; he was 6-for-19 with a walk, double and homer (off Mark Melancon) in the NLDS and 5-for-22 with a double and two walks in the NLCS with Craig still out. He struggled mightily in the 2013 World Series, though, going 3 for 22 with a double, no walks, no runs, no RBI and seven strikeouts as St. Louis fell to the Boston Red Sox.

Adams was the undisputed starter at first base for the Cardinals in Cardinals, playing 142 games, including 132 starts. He had another productive season, hitting .288 with 34 doubles, 5 triples and 15 homers, scoring 55 runs and driving in 68. The Cardinals traded Craig to the Red Sox at the end of July, confirming that they saw Matt as the starter going forward. In the postseason, he hit .250 with a home run in the NLDS as the Cards defeated the Los Angeles Dodgers, then .222 with 2 homers and 3 RBI in their NLCS loss to the San Francisco Giants. He returned as the team's starter at first base in 2015, but his season ended early because of injury. He was batting .243 with 4 homers and 20 RBI in 43 games when he injured his right quadriceps while running out a double against the Arizona Diamondbacks on May 26th. He had to be taken out of the game immediately and an exam revealed a serious strain requiring surgery. It was the second serious injury suffered by the first-place Cardinals that month, as they lost ace pitcher Adam Wainwright to a torn Achilles tendon a couple of weeks earlier. Like Wainwright, he confounded medical predictions by making it back to the field before the end of the season, being activated on September 10th and being used regularly as a pinch-hitter during the last three weeks of the year. He finished the year with a .240 average in 60 games with 5 homers and 24 RBI and a deflated OPS+ of only 78. He was not used in the postseason.

On July 22, 2016, Adams hit a walk-off homer off Bud Norris of the Los Angeles Dodgers in the 16th inning to give the Cardinals a 4-3 win. It was the major highlight of a disappointing season in which he hit .249 in 118 games, with 18 doubles and 16 homers. Those were not bad numbers (his OPS+ was back to a respectable 107) but the Cardinals were expecting more, and, after missing the postseason, decided to look for another solution at first base, moving one of their surplus middle infielders - Matt Carpenter - there in 2017, relegating Matt to the bench. On May 20, 2017, he was traded to the Atlanta Braves in return for minor league infielder Juan Yepez. He had become superfluous to the Cardinals' needs, getting only 48 at-bats in the team's first 48 games, but the Braves were badly in need of a first baseman after losing All-Star Freddie Freeman to a broken wrist a few days earlier. He made an immediate contribution to his new team on May 22nd when he hit a two-run homer at SunTrust Park in a 5-2 win over the Pittsburgh Pirates. He hit so well in his first few weeks with the team that when Freeman began rehabbing in late June for a possible return in mid-July, he began to work out at third base, as the Braves wanted to have both players in their lineup. Matt was hitting .294 with 11 homers and 29 RBI in his first 30 games with Atlanta, production similar to what Freeman had been providing before his injury. He finished at .271 with 19 homers and 58 RBI in 100 games for the Braves, but while Freeman did play a few games at third base, it was clear the team still counted on him as their first baseman, leaving Matt the odd man out given his inability to play elsewhere. They let him become a free agent, and, on December 20th, he signed a contract with the Washington Nationals, where he would back up Ryan Zimmerman at first base, essentially taking over the duties Adam Lind performed the prior season. He got to play a lot more than expected in the first half, as Zimmerman missed a good chunk of time. He hit .288 with 15 homers and 39 RBI in 68 games in the first half, but his production slipped after the All-Star break, as he hit just .155 in 26 games. On August 21st, the Nationals basically gave up on the season and placed him on waivers and he was claimed by his original team, the Cardinals. He soon made the Nats regret the move as, on September 5th, he homered twice against Tanner Roark in a 7-6 win at Nationals Park. It was a rare highlight for him in a Cards uniform, as he hit just one more homer and batted just .158 in 27 games.

Following the 2018 season, Adams became a free agent and, in December, he agreed to return to the Nationals on a one-year, $1 million contract. He was the Nats' most used first baseman in 2019, playing 111 games and hitting .226 with 20 homers and 56 RBI. He shared playing time with two older veterans, Howie Kendrick and Zimmerman, and the two saw the bulk of the playing time in the postseason. Matt had a total of 4 plate appearances over four rounds of postseason play, and his experience in the World Series was limited to drawing a walk against Brad Peacock while pinch-hitting for Fernando Rodney in a 3-1 loss to the Houston Astros in Game 3. He did win a championship ring as the Nationals defeated the Astros in seven games. He became a free agent again after the season and joined the New York Mets on a minor league pact for 2020. However, with the Mets being well endowed in terms of first basemen with Pete Alonso and Dominic Smith, he had little chance to earn a spot on the team. They released him during the second phase of "spring" training on July 18th, but he quickly landed on his feet, returning to the Atlanta Braves. With the DH in effect for the upcoming season, he did not have to worry about taking playing time away from Freeman, and could simply let his bat do some damage.