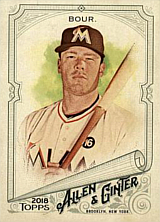 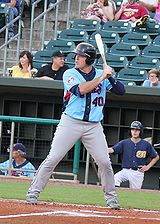 Justin Bour' flashed big time power during his days manning first base with the Miami Marlins.

On May 17, 2015, he spoiled the Atlanta Braves' Shelby Miller's bid for a no-hitter with a single to center field with two outs in the bottom of the 9th; Dee Gordon followed with another single, but the Marlins lost 6-0, and manager Mike Redmond was fired shortly after the game. Bour had an excellent year in 2015 after playing 39 games in 2014, just under the cut-off to still be considered a rookie. He took over as the Marlins' starting first baseman, displacing Mike Morse, and hit .262 in 129 games, with 20 doubles and 23 homers, 42 runs scored and 73 RBI. He had his best month in September, when he was named the National League Rookie of the Month thanks to 9 homers and 25 RBI in 26 games while hitting .290. He was named to the 2015 Topps All-Star Rookie Team in recognition for his excellent work. Injuries limited Justin to 90 games in 2016, but he continued to be a productive hitter while on the field, with a .264 average, 15 homers and 51 RBI. His OPS+ was 122 after being at 120 as a rookie. In particular, he improved his walk rate, as he went from 34 to 38 walks in significantly fewer at-bats, while cutting his strikeouts almost in half. On April 30, 2017, he set personal bests with 4 hits and 6 RBI in leading the Marlins to a 10-3 win over the Pittsburgh Pirates; the hits included a double and a homer and allowed him to finish April above the Mendoza Line, as he was batting .184 before the game but improved to .222 as a result. He ended the season at .289 with 25 homers and 83 RBI in 108 games.

The Marlins went through their semi-annual fire sale before the 2018 season, but Bour was one of the few veterans who were kept around. His days seemed numbered as a player making real dollars, but he made it through the non-waiver trading deadline without moving (2018 being the last season with a waiver deadline). After 112 games, he was hitting .227 with 19 homers and 54 RBI when, on August 10th, he was traded to the first-place Philadelphia Phillies, along with cash, in return for minor league pitcher McKenzie Mills. With Carlos Santana entrenched at first base for the Phils, he was likely to be used mainly as a pinch-hitter for the rest of the season. Indeed, he had just 49 at-bats in 29 games, hitting .224 with a homer and 5 RBI. He became a free agent after the season and, on December 12th, signed with the Los Angeles Angels to provide some insurance, given that both Shohei Ohtani and Albert Pujols had undergone surgeries in the offseason. The wheels came off in 2019, as he batted a disastrous .172 with only 8 home runs in 52 games.

A free agent after the year, he elected to peddle his wares in Japan, signing with NPB's Hanshin Tigers for 2020. He had a decent season, hitting .243 in 99 games, with 17 homers and 45 RBIs. His home run rate placed him in the top 10 in the Central League. In 2021, he decided to return to the U.S., signing a minor league contrat with the San Francisco Giants.