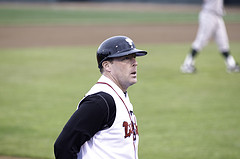 Primarily a backup catcher during his 13 season big league career, Mike Redmond went 253 games behind the plate without committing an error between 2004 and 2010, setting a big league record. He retired following the 2010 season and was named manager of the Lansing Lugnuts for 2011, moving on to the Dunedin Blue Jays in 2012.

On November 1, 2012, Redmond was announced as the manger of the Miami Marlins in 2013, succeeding the controversial Ozzie Guillen. Owner Jeffrey Loria cited his close ties with the Marlins organization, in addition to his great baseball mind, as factors that motivated the choice. When the Marlins were shut out in their first two games of the season, Redmond became only the second manager in major league history to have that happen; the first had been Jack Chapman of the 1876 Louisville Grays. The losses both came against the Washington Nationals, 2-0 and 3-0 on April 1st and 3rd. Before the year was over, another manager would have a similar rough welcome, as it was the fate that befell Ryne Sandberg when he replaced Charlie Manuel as skipper of the Philadelphia Phillies on August 16th. As expected, the Marlins had a rough year in 2013, finishing last in the NL East with 100 losses, but they showed a lot of signs of improvement in 2014. Even though they were without young pitching ace Jose Fernandez for most of the season, they hung on around .500 for a long time, even being on the edges of the race for the division title until the Washington Nationals got hot in August. They sputtered in September after losing All-Star OF Giancarlo Stanton to an injury as well, but their record of 77-85 was considered very promising, especially as it was largely built on the contributions of young players who were bound to improve further.

The Marlins went out on a limb before the 2015 season, signing Stanton to a huge long-term contract and adding a number of pieces around him such as 2B Dee Gordon and 3B Martin Prado. The message was they were serious about being competitive immediately, but they got off to a poor start. On May 17th, after coming within one out of the Marlins being no-hit by Shelby Miller of the Atlanta Braves, completing a three-game sweep, Redmond was fired along with bench coach Rob Leary. The firing was clearly dictated by owner Jeffrey Loria, and not by GM Dan Jennings, who was named as his replacement.

In 2017, he returned to the field as bench coach of the Colorado Rockies under new manager Bud Black.