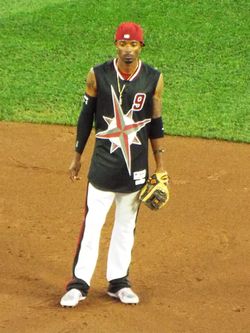 Dee Gordon is the son of Tom Gordon and brother of Nick Gordon. Dee's first major league season was 2011, while his dad's final one was 2009. He had a difficult early life, as his mother was murdered by her boyfriend when he was 6, and he was raised by his grandmother, while his father was off playing baseball and raising the rest of his children.

Dee Gordon didn't play baseball until his senior year in high school. Undrafted, he played baseball for NAIA Southeastern University in 2007 before transferring to junior college. He was picked by the Los Angeles Dodgers in the 4th round of the 2008 amateur draft even though he had not played in junior college that year due to failure to quality academically. He was signed by scout Scott Hennessey for $250,000 and debuted as a pro with the Ogden Raptors, hitting .331/.371/.430 with 18 steals in 23 tries and 45 runs in 60 games, showing the speed on the bases that his father had shown on the mound. The young Gordon was fourth in the Pioneer League in average and 10th in OBP. Baseball America rated the shortstop as the #4 prospect in the league behind Wilin Rosario, Cutter Dykstra and Will Smith. Baseball America also named him the #7 Dodgers prospect. Gordon did not win out All-Star honors as those went to Tyler Kuhn at short.

Dee starred in the Midwest League in 2009. With the Great Lakes Loons, he put up a .301/.362/.394 line with 73 stolen bases in 98 tries, 12 triples and 96 runs. He followed with a .357 postseason average with 7 runs produced in six games. He led the MWL in swipes by 22 over Tyler Pastornicky (another son of a major leaguer), times caught stealing and in triples. He was second in hits (162, four behind Rebel Ridling) and runs (four behind Jaime Pedroza). He also led league shortstops in errors (34) and double plays (78). He was second in the minors in steals behind only Anthony Gose and tied for the most times gunned down running. He split MVP honors with Kyle Russell, was named the All-Star shortstop and was named the MWL Prospect of the Year. He was named the Dodgers Minor League Player of the Year as well. Baseball America named him the MWL's Best Baserunner, Fastest Baserunner and Most Exciting Player and the Dodgers' Fastest Baserunner, Best Athlete and Best Defensive Infielder. Baseball America rated him the #2 MWL prospect behind Aaron Hicks and right ahead of Josh Vitters and Brett Lawrie. They also named him LA's top prospect going into 2010 and the 36th-best prospect in minor league ball.

Assigned to the Chattanooga Lookouts to open 2010, he was at .286/.333/.370 after 67 games with 44 runs and 27 steals in 38 tries. He was picked to play for the USA in the 2010 Futures Game. He started the game at short, batting second for the USA. In the first, he drew a Simon Castro walk and came around on a hit by Eric Hosmer to put the USA up 2-0. In the second, he lined out against Hector Noesi. He singled off Henderson Alvarez to open the 5th but was erased when Mike Moustakas hit into a twin killing. Grant Green replaced him at short. The US went on to a 9-1 win.

After starting 2011 with the Albuquerque Isotopes, Gordon was recalled by the Dodgers and made his big league debut in June. He became the Dodgers' starting shortstop after Rafael Furcal was dealt to the St. Louis Cardinals at the trading deadline on July 31st, but went on the disabled list less than two weeks later with a shoulder contusion and did not come back until September 1st. He made up for lost time by earning National League Rookie of the Month honors in September. He hit .372 during the month and recorded multi-hit performances in 14 of his 26 games and also stole 12 bases. He finished the year hitting .304 in 56 games.

Gordon began 2012 as the Dodgers' starting shortstop and was leading the National League with 28 stolen bases when he suffered a dislocated thumb on his right hand sliding into third base on July 4th, sending him to the disabled list. He only came back to play a few games in September, ending the year with a batting line of .228/.280/.281 in 87 games, a major disappointment after his promising rookie campaign. The Dodgers acquired Hanley Ramirez from the Miami Marlins while Gordon was out, putting his future role in question. When Ramirez was injured during the 2013 World Baseball Classic, forcing him to miss the start of the 2013 season, it opened the door for Gordon to reclaim his old position, but he lost out to Justin Sellers, with his replacement the previous year, Luis Cruz, manning third base. However, both Sellers and Cruz started the year stone cold at the plate, combining to go 1 for 33 in the team's first week, while back in Albuquerque, Gordon reminded the Dodgers of his existence with a tremendous play that made highlight reels around the country on April 8th. He ran at full speed towards left-center field to catch a ball hit over his head, fell to his knees and then, without getting up, threw a strike all the way to first base to double off the stunned baserunner trying vainly to return to first. He hit .297 in 92 games at Albuquerque, stealing 49 bases and scoring 65 runs. He made three different stops with Los Angeles, spending most of May, a week in August and September in L.A. He played 38 games in the majors, hitting .234 with 10 stolen bases. He played in two games in the postseason, both as a pinch-runner, getting no at-bats and being caught stealing in Game 2 of the NLDS against the Atlanta Braves.

In 2014, following the departure of 2B Mark Ellis, he got a chance to compete for the position in spring training against a crowded field of pretenders. He ended up securing the left-handed half of a platoon arrangement and started the second game of the season, played in Sydney, Australia, on March 23rd. He had a great day against the Arizona Diamondbacks, going 3 for 4 with a sacrifice fly, 2 runs and an RBI to lead the Dodgers to a 7-5 win. Installed as the Dodgers' leadoff hitter, he had a blazing start on the basepaths, stealing 24 bases in the team's first 35 games; he was only the third player to do so, following Vince Coleman and Scott Podsednik. He made the All-Star team and ended up leading the majors with 64 stolen bases, becoming the first member of the Dodgers to lead the National League in the category since Davey Lopes in 1976. He also led the league with 12 triples, hitting .289 and scoring 92 runs on 176 hits. In the postseason, he went 3 for 17 as the Dodgers lost to the St. Louis Cardinals in the NLDS.

While it looked that Gordon had secured a starting job with the Dodgers for a long time, he fell victim to their desire to win now with more veteran players. The Dodgers targeted Howie Kendrick to be their new second baseman, and to do so sent Gordon to the Miami Marlins on December 10th, along with Dan Haren and Miguel Rojas in return for Ps Andrew Heaney and Chris Hatcher and two utility players, Austin Barnes and Enrique Hernandez. They then sent Heaney to the Los Angeles Angels to acquire Kendrick. Gordon started off where he had left off the previous season with the Marlins in 2015. He hit .409 in April and continued to slam the ball in May. On May 13th, he had four hits including two doubles in leading Miami to a 5-4 win over his former team, the Dodgers. He had already had a five-hit and another four-hit game that year, and was leading the National League in both batting average and base hits at that early point. On June 30th, he hit the first inside-the-park home run in the history of Marlins Park, a three-run shot that gave the Marlins a 5-3 win over the San Francisco Giants. He was voted as a starter on the NL All-Star team but had to bow out of the game when he dislocated his left thumb a few days before the game, on July 11th, forcing him to sit out a few games. He won the batting title on the last day of the season when he went 3 for 4 to finish at .333, ahead of Bryce Harper of the Washington Nationals who was at .330.

On January 13, 2016, he cashed in on his great 2015 season, signing a five-year contract extension with the Marlins worth $50 million. However, three week into the 2016 season, he was handed an 80-game suspension for testing positive to not one but two PEDs: testosterone and clostebol, an easily detectable old-school steroid. He was batting .266 with 6 stolen bases in 21 games at the time and was the third major leaguer suspended for similar violations since the start of the season, following Daniel Stumpf and Chris Colabello. Like almost all player caught before him, Gordon claimed he did not know how the banned products got into his system, but he then apologized for his mistake, tacitly admitting his wrongdoing. He returned to the Marlins on July 28th, but was now banned from taking part in any postseason contests, should Miami make it that far, and had seen his replacement, Derek Dietrich, play very well in his absence. he played 79 games until the end of the season, hitting .268 with 1 homer and 14 RBIs, but scoring 47 runs and stealing 30 bases in 37 attempts.

After playing second base exclusively since 2014, he was used at the starting shortstop by the Marlins on May 10, 2017, because of a string of injuries. The Fish had been forced to place SS Adeiny Hechevarria on the disabled list, where he joined 3B Martin Prado and back-up SS Miguel Rojas. When rookie J.T. Riddle was injured in pre-game drills, manager Don Mattingly decided to slide Gordon over to short, as his only remaining healthy infielder was Steve Lombardozzi, who had only ever played short for two games back in 2011 and was more comfortable at second. Gordon played a career-high 158 games for Miami that season, hitting .308 with 114 runs, 2 homers and 33 RBIs. He also led the NL with 60 stolen bases (and 16 caught stealing). With a new Marlins ownership wanting to cut the salary mass, however, he was traded on December 7th to the Seattle Mariners in return for three prospects. With Robinson Cano already entrenched at 2B in Seattle, he was expected to move to the outfield in 2018, a position he had never played except for a few games in the winter leagues.

Heading into the 2018 season, it was determined by statcast that he was the fastest player in the majors, beating out other notable speedsters such as Byron Buxton and Billy Hamilton, when running from home plate to first base. He was the Mariners' starting centerfielder on Opening Day, March 29th and played the position exclusively until May 18th, when he made his first appearance at second base. That move was prompted by an injury to Cano, who was then served an 80-game suspension for a drugs violation. Gordon thus seemed about to stay at second for a long stretch, but on May 22nd, the Mariners placed him on the disabled list retroactive to the previous day with a fractured toe. He had initially injured the toe back on May 9th but had continued playing until aggravating the injury on May 20th. He was hitting .304 in 45 games and leading the American League with 16 stolen bases when he went on the DL. He was re-activated on May 31st. On July 3rd, he recorded the 300th stolen base of his career.