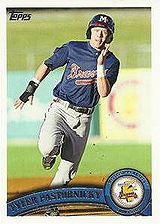 Pastornicky was picked by the Toronto Blue Jays in the fifth round of the 2008 amateur draft. He had a college commitment to Florida State University but was signed by scout Joel Grampietro for the Jays instead. With the GCL Blue Jays that year, he hit .263/.349/.356 and stole 27 bases in 32 tries. He fielded .962, leading all shortstops in the Gulf Coast League.

He was called up to the active roster of the Atlanta Braves prior to the final game of the 2011 season but did not get into the game. He had started the year back at Mississippi, hitting .299 in 90 games, then was blazing-hot after a late-season promotion to the AAA Gwinnett Braves. In 27 games in the International League, he hit .365 with 15 runs, to end the year with a combined .314 average in 117 games, with 65 runs and 45 RBI. After the season, the Braves elected not to re-sign their shortstop, Alex Gonzalez for 2012, leaving the job open for Tyler, although they did sign veteran Jack Wilson as insurance in case the 22-year-old proved not to be ready to handle everyday duties at the major league level. He hit his first major league homer off the Houston Astros' Kyle Weiland on April 10th.

He represented the United States in the 2015 Premier 12.