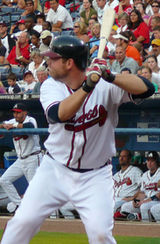 Brian McCann was drafted by the Atlanta Braves in the 2nd round of the 2002 amateur draft. He was signed by scout Al Goetz and made his pro debut that summer. Brian debuted on June 10, 2005, going 2 for 3 with a RBI and an intentional walk. The next day, Brian hit his first home run off Justin Duchscherer. He made team history becoming the first player to hit a home run in his first playoff at-bat, off Roger Clemens, in Game 2 of the NLDS.

During the 2006 season, McCann hit .333 with 24 homers and 94 RBI. He led all Major League catchers in homers, and his RBI total was matched only by Jorge Posada and Victor Martinez. McCann was selected to play in the 2006 All-Star Game, in his first full major league season going 0-1 in the summer classic. It was for him the first of seven All-Star selections.

He announced his retirement following the 2019 Division Series, after 15 major league seasons.

McCann is the brother of minor league 1B Brad McCann and the step-brother of former major leaguer Mark Teixeira.