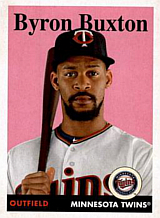 Byron Buxton was the second player picked in the 2012 amateur draft. He made his big league debut in 2015.

Buxton hit .513 with 17 doubles and 38 steals as a high school senior while going 10-0 with 154 strikeouts in 81 innings as a pitcher. On May 31, 2012, he struck out 18 to help his team win its first state title. He had been timed at 6.6 seconds in the 60-yard dash as well. His athleticism also shone through on the football field, where he was an All-State receiver and defensive back with a football scholarship offer to the University of Georgia. All that was enough to convince the Minnesota Twins to pick him second overall in the 2012 amateur draft, one selection after Carlos Correa of Puerto Rico. He signed for a $6 million bonus and made his pro debut with the GCL Twins on June 22nd, going 0-for-4. He also played for the Elizabethton Twins that first season, finishing with a combined batting line of .248/.344/.448 in 48 games.

In 2013, Buxton began the year with the Cedar Rapids Kernels of the Class A Midwest League where he hit an excellent .341 in 68 games. At midseason, he was promoted to the advanced Class A Fort Myers Miracle of the Florida State League, but did not slow down much, as he hit .326 in 57 games. Between the two, his batting line was .334/.424/.520 in 120 games, with 109 runs scored, 19 doubles, 18 triples, 12 homers, 77 RBI and 55 steals. Those eye-popping numbers resulted in his being ranked the #1 prospect in all of baseball by Baseball America prior to the 2014 season. He was in spring training with the Twins and, while there was speculation he would be in the majors before the All-Star break, he was sent back to Fort Myers to begin the season. Even more surprising, he seemed to lose his batting stroke there, as he hit only .240 in 30 games, losing a lot of playing time to various injuries. After a couple of strong performances in early August, the Twins promoted him to AA on August 11th, assigning him to the New Britain Rock Cats of the Eastern League. In his first game for his new team, he suffered a concussion and had to be taken to hospital in an ambulance as he collided with right fielder Mike Kvasnicka in the 5th inning. He was unconscious for 10 minutes following the jarring collision. Although he did not suffer any fractures, the Twins decided to play it safe and announced that Buxton would not return that season. Buxton headed to the Arizona Fall League after his truncated 2014 season, but the injury bug found him there as well. On October 27th, he broke a finger on his right hand while diving to catch a sinking line drive.

Even with the lost season, he still entered 2015 as the #1 prospect in baseball for the second straight year. He was assigned to the AA Chattanooga Lookouts, where he was hitting .283 with 12 triples, 6 home runs, 44 runs scored and 37 RBI in 59 games when he got the call to the majors on June 14th, as the Twins were short on outfielders. He made his big league debut a week after Carlos Correa, who had been drafted ahead of him in 2012. His debut against the Texas Rangers was successful, as he scored the winning run in the 9th inning despite going 0 for 4. Playing center field and hitting 9th, he reached on a fielder's choice then scored on a double by Eddie Rosario to give Minnesota the winning margin in a 4-3 win that snapped a five-game losing streak. The next day, he hit a triple for his first major league hit, but also slammed into the center field wall at Busch Stadium in an attempt to catch a triple off the bat of Randal Grichuk in a 3-2 loss to the St. Louis Cardinals. He managed to escape serious injury this time. But the injury bug would not spare him long: on June 26th, he was placed on the disabled list with a sprained left thumb. He was hitting .189 after 11 games. He came back on August 20th and, two days later, collected his first career RBI, a tie-breaking 7th-inning single in a 3-2 win over the Baltimore Orioles. He hit .209 in 46 games that first season, with 2 homers and only 6 RBI.

Buxton's sophomore season was a big disappointment, as the Twins were expecting him to take a big step forward, but he continued to struggle at the plate in the majors in 2016. In 92 games with the last-place team, he hit only .225, with an OBP of .284, adding 10 homers and 38 RBI. His control of the strike zone was very poor, with 23 walks but 118 strikeouts. He continued to struggle in the first half of 2017, hitting just .216 with 5 homers and 16 RBI in 83 games. The Twins were playing much better and he was contributing to their success with great defense, which explains why he was in the lineup every day despite the underwhelming bat. He showed the first hints of being a solid major league hitter that August, when he seemed to find his power stroke. On August 27th, he had the first three-homer game of his career, victimizing the Toronto Blue Jays in a 7-2 Twins win. He connected off Joe Biagini with a two-run shot in the 4th, after having driven in a run with a single in the 1st. He then led off the 7th with a long ball off Matt Dermody and added another solo shot in the 9th against Tim Mayza. Overall, he scored 4 runs, drove in 5 and added a stolen base, capping a three-game series in which he went 7-for-13 as the Twins continued to hang on, unexpectedly, to a potential wild card spot in the American League. On September 14th, he hit a walk-off homer into the second deck at Target Field off Luis Santos in the 10th inning to give Minnesota a 3-2 win over the Blue Jays. His great second half meant that he finished the season at .253 with 16 homers, 69 runs scored and 51 RBI in 140 games. He also won the Gold Glove as the American League's best defensive center fielder. The Twins made it to the postseason as the second wild card team and Byron started the Wild Card Game against the New York Yankees on October 3rd. He went 0 for 2 but drove in the tying run with a force out against David Robertson in the 3rd and then proceeded to steal second base. The score was 4-4 at that point, but he was stranded on base, and in the 4th inning he had to leave the game in favor of Zack Granite because of an injury. The Twins went on to lose the game, 8-4.

In 2018, he started the season hitting just .195 through his first 11 games, going on the disabled list on April 18th, retroactive to April 15th, complaining of recurrent migraine headaches. He was on a rehabilitation assignment with the Fort Myers Miracle on April 22nd when he fouled a ball off his toe. X-rays showed a hairline fracture, putting him on the shelf for an extended period. He ended up playing just 28 games, during which he hit .156. He bounced back in a remarkable manner in 2019 as he played 73 games during the first half and hit .253 with 24 doubles and 9 homers. The injury bug bit him again in the second half, when he played just 14 games. On September 10th, his season was officially over as the Twins placed him on the 60-day injured list to undergo surgery for a torn labrum in his left shoulder. He finished the year at .262/.314/.513, good for an OPS+ of 114, by far the best offensive performance of his career. He continued to hit well in 2020, even though he again missed significant time, playing 37 of the Twins' 60 games in a season shortened by the COVID-19 pandemic. His OPS+ was 126 as he hit .234 but with 13 homers in just 130 at-bats, scoring 19 runs and driving in 37. In spite of his limited playing time, he received some consideration on the MVP ballot, finishing 16th. He played in the postseason for the second time, going 1 for 4 in the Twins' loss to the Houston Astros in the Wild Card Series, starting Game 1 one and pinch-running in Game 2.

He started the 2021 season as one of the hottest hitters in the majors, going 13 for 27 with 4 doubles and 5 homers in his first 8 games. He kept it up for the entire month, being named the American League Player of the Month for April on the strength of a .426 average with 8 homers, 14 RBIs and 15 runs scored in 18 games. No Twins player had won the award since Delmon Young in 2010. However, the injury bug bit him again, as he played only three games from May 7 to August 27, missing two-thirds of the season. He was hitting .370 when he first went down, and finished the season at .306 in 61 games and 235 at-bats. In spite of all the time missed, he slugged 23 doubles and 19 homers, good for a slugging percentage of .647 and an OPS+ of 171. There was no question that he was one of the best and most exciting players in baseball when he was in the line-up, but the doubt was whether he would ever be healthy enough to showcase his considerable talent. The Twins made a bet that his health would hold up, as on November 28th they signed him to a seven-year contract extension worth $100 million, with a lot of incentives built in: the deal only guaranteed him $9 million the first year and $15 per season after that, but with large potential bonuses for plate appearances and for a high finish in the MVP voting.

He began 2022 with a hoy first week, going 5 for 23 with all the hits going for extra base, then led off the game of April 15th against the Boston Red Sox with a double, but as he slid into second base, he banged the ground in frustration and was immediately removed from the game. While he was not visibly limping, it was announced that he had suffered a knee injury, and everyone couldn't help but think "Here we go again!" However, there was some good news as an MRI came back negative and Byron was back in the line-up on April 21st. On April 24th, he hit what was billed as the longest walk-off homer on record when his second long ball of the game was a 469-foot blast against Liam Hendriks in the 10th inning for a 6-4 win against the Chicago White Sox. He drove in 5 of his team's 6 runs in the game, giving him 6 homers and 11 RBIs in 10 games, and a .946 slugging percentage.