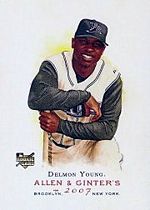 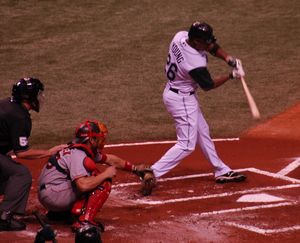 The brother of Dmitri Young, outfielder Delmon Young was picked by the Tampa Bay Devil Rays as the first overall selection in the 2003 amateur draft. Scouted by Rich Aude, he was signed to a big league deal with $5.8 million guaranteed and made his pro debut the next summer.

In 2005, he was named Minor League Player of the Year was rated the #1 prospect by Baseball America. He expected to be called up for a first taste of Major League Baseball at the end of the season, but wasn't, and loudly expressed his disappointment to the media. He was expected to contend for a starting job during spring training in 2006, but the Devil Rays sent him to the AAA Durham Bulls to get more experience. During an April 26th Bulls game, he was ejected from the game for arguing an umpire's call. Young responded by tossing his bat at the ump, which led to a 50-game suspension, the longest ever in International League history. He was named the top prospect in the IL by Baseball America and hit .316/.341/.474 with 22 steals in 26 tries. Had he qualified, he would have led the IL in average. Later that season, he made his big league debut ten years to the day after his brother had debuted. He did not disappoint, hitting a two-run homer against the Chicago White Sox. He batted .317/.336/.476 overall with the 2006 Devil Rays.

Young played every game in the 2007 Devil Rays season, making him the first rookie since Hideki Matsui in 2003 to play in all of his team's contests. He collected 186 hits, with 38 doubles and 13 homers, scored 65 runs and drove in 93 while hitting .288. The lone black spot on his record was that he drew only 26 walks, for a pedestrian .316 OBP.

On November 29, 2007 Young was traded along with Brendan Harris and Jason Pridie to the Minnesota Twins for Matt Garza, Jason Bartlett and Eduardo Morlan. After a couple of so-so seasons in Minnesota, he had a breakthrough year in 2010, driving in 112 runs and finished 10th in the MVP vote as the Twins won the AL Central division title. Yet, less than a year later, on August 15, 2011, he was traded to the Detroit Tigers in return for a fringe prospect, Class A pitcher Cole Nelson, and a player to be named later - P Lester Oliveros. Young was batting .266 with 4 homers and 32 RBI in 84 games at the time of the trade. He was outstanding for the Tigers during the rest of the season: he hit .274 with 8 homers and 32 RBI in 40 games, helping the Bengals to run away with the AL Central title. He was the team's best hitter when they upset the New York Yankees in the ALDS, going 6 for 19 with 3 homers. He slumped in the ALCS, going 2 for 15 as the Tigers lost to the Texas Rangers in 6 games, although both of his hits were long balls. Surprisingly, though, the Tigers decided not to offer Young a long-term contract after the season, explaining they wanted to see more.

In 2012, Young was back as the Tigers' starting left fielder at the start of the year, batting behind superstar sluggers Prince Fielder and Miguel Cabrera. He was hitting .242 in 16 games when he got himself in trouble near the team's hotel in downtown Manhattan in the early hours of April 27th. Visibly intoxicated, he got into an altercation with passers-by, and was arrested and charged with aggravated assault, the charges being considered a hate crime as he hurled anti-semitic epithets during the incident. After being let out on bail, he was immediately placed on the restricted list and sent to baseball's Employee Assistance Program for an evaluation. On April 30th, Major League Baseball handed him a 7-day suspension without pay, retroactive to the day of the incident, and mandated him to participate in a treatment program. In a released statement, commissioner Bud Selig said: "Those associated with our game should meet the responsibilities and standards that stem from our game's stature as a social institution. An incident like this cannot and will not be tolerated. I understand that Mr. Young is regretful, and it is my expectation that he will learn from this unfortunate episode." He played 151 games for the Tigers that year, hitting .267 with 18 homers and 74 RBI, moving out of LF to become the team's primary DH shortly after the incident; batting after sluggers Cabrera and Fielder, he had relatively few opportunities to pick up RBIs, and his low walk total (20) meant that he scored only 54 runs. Still, he was extremely durable and had an outstanding ALCS, going 6 for 17 with 2 homers, 3 runs and 6 RBI, including the game-winner in all four games of a Tigers' sweep over the New York Yankees. He was named the ALCS MVP as a result. In the 2012 World Series, he was one of the few Tigers to hit decently as his team was swept in four games by the San Francisco Giants, going 5 for 14 with a double and a homer. After the season, he pleaded guilty to a misdemeanor charge in connection with the incident in New York and was ordered to undergo a session on tolerance and to perform 10 hours of community service. He also got some more bad news as the Tigers declined to pick up his option for 2013 in spite of his postseason heroics, making him a free agent.

On January 22, 2013, Young signed a one-year contract with the Philadelphia Phillies for a salary of $750,000, a staggeringly low amount for a hitter with his track record and ability. However, his defensive liabilities had considerably reduced the market for his services, and his deal with the Phils came with no guarantee of playing time. The deal included a substantial additional amount that could be earned through bonuses, including $600,000 if Young managed to keep his weight under 230 pounds all season; other bonuses included ones for times spent on the major league roster, and for his number of plate appearances, up to a maximum of $2.5 million in addition to his base salary. However, he missed the start of the season because of surgery to repair a microfracture on his ankle. He was activated on April 30th and immediately made his presence felt, homering off the Cleveland Indians' Zach McAllister and finishing the game 2 for 3. His return to the line-up was the only highlight of the day for the Phils, who were crushed 14-2 in a game in which Cleveland banged 7 homers. On June 28th, he set a career best by driving in 6 runs to lead the Phillies to a 16-1 win over the Los Angeles Dodgers. He was hitting .261 with 8 homers and 31 RBI in 80 games when the Phils designated him for assignment on August 9th when they claimed Casper Wells on waivers. It turned out to be a blessing for Young, as he signed with his original team, the Tampa Bay Rays and hit well as their main designated hitter down the stretch, hitting .258 with 3 homers and 7 RBI in 23 games. He then contributed some more postseason heroics in the American Wild Card Game on October 2nd, homering off Danny Salazar to lead off the 3rd inning and open the score in Tampa Bay's 4-0 win over the Cleveland Indians.

In January of 2014, Young signed a minor league contract with the Baltimore Orioles coupled with an invitation to spring training. He had a nice season for the Orioles that year, splitting his time between DH and left field. In 83 games, he hit .302 with 11 doubles, 7 homers and 30 RBIs, then went 2 for 9 in the postseason as the Orioles were eliminated in the ALCS. He re-signed with the team for 2015, but was released on July 9th after baltimore was unable to find a team willing to take him in a trade. In 52 games, he had hit .272 with 2 homers and 16 RBIs. His lack of power and walks (his OBP was .289) meant that he was well-below average as a hitter, with an OPS+ of 71, a sharp drop-off from the 117 he had posted the previous season. Given his lack of defensive value, he was no longer a useful player. He sat out the rest of the season.

Still looking for a team willing to sign him for 2016, Young then got into more legal trouble in the early hours of February 7th when he was arrested in Miami, FL for attempting to choke a hotel worker. He had apparently tried to gain admittance to a club at the hotel that was already closed, and had hurled ethnic slurs at the valet who refused him access before assaulting him. Police found him at his nearby condo where he was under the apparent influence of alcohol and then proceeded to insult the arresting officers as well, according to police reports. He faced a felony battery charge.

Young was considered by many scouts to be a future 30/30 player, but his speed disappeared quickly after he stole 14 bases in 2008, to the point that he stole only a single base over two full seasons in 2011 and 2012. His burgeoning weight was part of the problem.