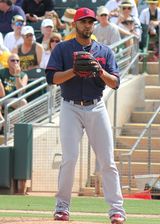 Pitcher Danny Salazar made his major league debut in 2013.

He made his MLB debut on July 11, 2013 as the starting pitcher against the Toronto Blue Jays. He pitched 6 innings that day, giving up one run on 2 hits to be credited with his team's 4-2 win to beat reigning Cy Young Award winner R.A. Dickey. He did not allow a hit in the first five innings before Josh Thole singled and Jose Bautista doubled in the 6th to manufacture the one run. Rich Hill wound up relieving. He was quite impressive over the rest of the season, going only 2-3, but with an ERA of 3.12 in 10 starts. His peripheral stats were particularly impressive, as he allowed only 44 hits in 52 innings and struck out 65 while walking only 15. As a result, he was given the ball as the starter in the AL Wild Card Game against the Tampa Bay Rays on October 2nd. He gave up 3 runs in 4 innings, including a homer to Delmon Young and was charged with the 4-0 loss.

Salazar was expected to be one of the Indians' top starters in 2014, given his solid performance as a rookie, but his season did not start well. After 8 starts, his record stood at 1-4, 5.53. White his strikeout rate continued to be solid with 47 Ks in 40 2/3 innings, he was getting hit hard, with 49 hits and 8 homers allowed. On May 16th, he was sent back to the minor leagues in order to right things. After going 4-6, 3.71 in 11 games for Columbus, he came back to Cleveland in late July and pitched better the rest of the way, finishing with a record of 6-8, 4.25 in 20 games, all starts. He pitched his first career complete game and shutout on September 3rd when he defeated the Detroit Tigers, 7-0, on a day when he walked none and struck out 9. Indeed, he struck out 120 batters in 110 innings, confirming the promise shown as a rookie.

Following the 2014 season, he was investigated by Cleveland Police on allegations of sexual assault stemming from an incident on January 23rd. However, police were unable to substantiate the allegations made by a 20-year-old woman and all charges were dropped. On May 10, 2015, he gave the struggling Indians a lift with a brilliant performance against the Minnesota Twins: after allowing a lead-off homer to Brian Dozier, he retired 21 straight batters, including 11 by strikeout, in earning an 8-2 win. His record was 4-1, while the rest of the team's pitchers were 7-18 at that point. He continued to pitch well until the end of the season, ending with a 14-10 record and an ERA of 3.45 in 30 starts and 185 innings. He also struck out 195 batters as a key member of one of the strongest starting rotations in the majors.

Salazar was outstanding in the first half of the 2016 season and a major reason why the Indians took a big lead in the AL Central by the end of June. He was the Pitcher of the Month in the AL in June when he went 5-0, 1.91 with 35 Ks in 33 innings. The Indians ended the month with 13 straight wins as he was right in the middle of things. He was 10-3 and leading the league with a 2.22 ERA when the month ended. A few days later, he was named to his first All-Star team. However, he skipped the game because the Indians wanted to give him some rest, then on August 1st, he made the shortest start of his career when the Minnesota Twins chased him after 2 innings, giving up 3 homers, including two by rookie Max Kepler and 6 runs in suffering his first loss since May. Worse, after the game, he underwent an MRI on his elbow. He was placed on the disabled list the next day and was expected to miss two to three weeks. He came back on August 18th, but was 0-2 over his next 5 starts before going down again with an elbow strain after his outing of September 9th. The hope was that he would be ready to pitch again by the postseason, and indeed, because the Indians were able to reach the World Series in spite of his absence, he was added to the roster for the Fall Classic. He made two relief appearances against the Chicago Cubs, in Game 2 and Game 6, pitching 3 scoreless innings during which he gave up only 1 hit and 2 walks while striking out 4.

Danny was back in the Indians' starting rotation at the beginning of 2017, but he struggled through his first 10 starts, going 3-5, 5.50. On May 28th, manager Terry Francona announced that he was being sent to the bullpen for the time being. He made a couple of relief appearances in early June, then went on the disabled list with a sore right shoulder. He came back on July 22nd to make one of the best starts of his career against the Toronto Blue Jays: in 7 innings, he gave up only one hit and no walks, the only baserunner being wiped out on a double play, and struck out 8 batters. He left with a 1-0 lead, but reliever Andrew Miller gave up a homer to Justin Smoak on his first pitch in the 8th and he ended up with a no-decision as Cleveland won the game in 10 innings on a walk-off homer by Francisco Lindor. He ended up going 5-6, 4.28 in 23 games, 19 of them starts, pitching 103 innings, taking a regular turn in the starting rotation over the last couple of months after making his return from the DL. He made just one appearance in the postseason, however, when he pitched 1 2/3 innings in relief in Game 4 of the Division Series against the New York Yankees on October 9th. He relieved Mike Clevinger with two outs and two on in the bottom of the 3rd, with Cleveland already trailing 5-0 and struck out Aaron Judge to end the inning. After a scoreless 4th, with Cleveland having narrowed the gap to 5-3, he tried to throw out Todd Frazier on a tapper in front of the mound to lead off the 5th, but his throw was wild and Frazier ended up on second base. After getting [Aaron Hicks]] to ground out to first, he was replaced by Tyler Olson, who gave up a sacrifice fly to Brett Gardner. The Yankees eventually won, 7-3, on their was to upsetting the Indians in five games.

In 2018, he arrived in spring training with a sore shoulder and was placed on the disabled list to start the year. When rest and physio therapy failed to set things right, he decided to have shoulder surgery in July, wiping out his season.