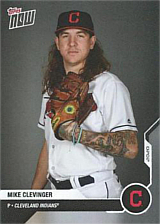 With Jacob DeGrom's departure from long hair, Mike Clevinger ascended to the throne of MLB's top hurler with a flowing mane. In a little under four full big league seasons, he has already recorded 563 strikeouts.

Mike was originally selected by the Los Angeles Angels of Anaheim in the 4th round of the 2011 amateur draft, out of Seminole Community College. On August 7, 2014, he was traded by the Angels to the Cleveland Indians in a very bad deal that netted the Halos a cooked Vinnie Pestano for their bullpen. When he made his major league debut for the Indians on May 18, 2016, Pestano had already washed out of the bigs the prior summer. In his first game, he started against the Cincinnati Reds and gave up 4 runs in 5 1/3 innings for a no-decision as Cleveland eventually prevailed, 8-7, in 12 innings. He went 3-3, 5.26 in 17 games, including 10 starts. Mike was on the team's postseason roster due to injuries to starters Carlos Carrasco and Danny Salazar and was used four times in long relief during the Tribe's run to Game 7 of the World Series - once in the ALCS against the Toronto Blue Jays and three times against the Chicago Cubs in the Fall Classic. He had no decisions and a 4.76 ERA in 5 2/3 innings.

Clevinger started the 2017 in the minors but was called up to Cleveland on May 7th to replaced the injured Corey Kluber. Starting against the Kansas City Royals, he gave up no runs in 5 2/3 innings in starting a 1-0 combined one-hit shutout. The lone safety was a double by Salvador Perez in the 4th. With the Indians in first place, but needing to strengthen their roster a bit at the trading deadline, Clevinger was the one player most teams wanted from the Indians, but they were adamant about not trading him. On August 12th, he rewarded the brass for the confidence shown by by striking out 9 batters in 7 innings in defeating the Tampa Bay Rays, 3-0, for his first win since the All-Star break. He had another great performance on September 8th, when he pitched 6 shutout innings against the Baltimore Orioles in a 5-0 win that was Cleveland's 16th in a row. On September 13th, he was credited with Cleveland's historic 21st straight win that set a new American League record. In that game, he allowed three runs - only one earned - to the Detroit Tigers in 5 2/3 innings as the Indians won, 5-3, and he improved to 10-5 on the year. While he pitched very well as a starter, the Indians used him out of the bullpen in his last couple of appearances during the regular season, in order to prepare him for the role the was going to play in the postseason. In 27 games, Mike finished 12-6 with a 3.11 ERA and 137 strikeouts in 121 2/3 innings.

On September 22, 2018, Clevinger reached the 200-strikeout mark for the first time of his career. He was the fourth pitcher on the Indians' staff to record 200 strikeouts that season, after Corey Kluber, Carlos Carrasco and Trevor Bauer, making the Indians the first team in major league history to have four such pitchers. He went 13-8, 3.02 in 32 starts, logging an even 200 innings and finishing with 207 strikeouts. He started Game 3 of the Division Series against the Houston Astros on October 8th and allowed just a run in 5 innings, striking out 9. It took him 99 pitches, and he gave way to Trevor Bauer in the top of the 6th, but Bauer could not hold the 2-1 lead as Houston went on to win, 11-3, sweeping the series.

Mike started strong in 2019, not giving up a run on just 2 hits over his first 12 innings while striking out 22, but he left his second start, against the Toronto Blue Jays on April 7th, after just 5 innings, complaining of back pain. It turned out to be more serious than anticipated, as he went on the injured list due to a major muscle strain, with the initial prognosis being that he would miss from six to eight weeks. He returned on June 17th and, after losing his first two starts, began to roll along like an unstoppable boulder. He was 4-0, 1.74 in July and 5-0, 1.96 in August, being named the American League Pitcher of the Month the latter month. Not coincidentally, the Indians, who had struggled in his absence, were back in the thick of the postseason race by then. Despite the shortened season, Mike finished 13-4 with a 2.71 ERA and a dominant 169 strikeouts with only 96 hits allowed in 126 innings, but the Indians missed the postseason.

He was 1-1, 3.24 after 3 starts in 2020 when on August 10th, it was revealed that he had violated the health and safety protocols imposed by MLB because of the Coronavirus pandemic, by making an unauthorized trip out of his hotel when the team was in Chicago, IL. He was the second Indians pitcher in two days caught in the act, after Zach Plesac, and he was immediately sent home and placed in quarantine, while he followed the procedure for players who were feared to have been exposed to the virus. The Indians then decided to punish the two further by sending them to the alternate training site for a spell, as their teammates were properly incensed at their stupid and selfish behavior. After a time in purgatory, Clevinger was called back on August 26th, the team having unexpectedly not missed a beat in the absence of 40% of its starting rotation. However, all was not smooth, as it became clear that the Indians were shopping him around with the August 31st trading deadline on the horizon, feeling that he had become a distraction but could still land a good haul that could help the team for the postseason. There were apparently a number of teams interested and a deal was consummated on the deadline itself, with the extremely active San Diego Padres winning the sweepstakes with a nine-player blockbuster. The Padres obtained Clevinger, OF Greg Allen and a player to be named later in return for C Austin Hedges, 1B/OF Josh Naylor, P Cal Quantrill, SS Gabriel Arias, IF Owen Miller and P Joey Cantillo. He made his first start with the Padres on September 3rd, a 2-0 loss to the Los Angeles Angels, allowing 2 runs in 6 innings. It was clear however that the Padres were seeing him as their ace and were hoping that he would start their first postseason game in 14 years a month down the road. That came into doubt on September 23rd as he had to leave a start against the Angels after one inning due to biceps tightness, and was scheduled to undergo an MRI. He did not pitch again during the regular season, missed the first round of the postseason, and made his return on October 6th, when he started Game 1 of the Division Series against the Los Angeles Dodgers; however, he pitched just one inning and left after just two pitches in the 2nd, complaining from pain in his elbow. That was it for him and on November 16th, on the day he signed a two-year deal worth $11.5 million, avoiding arbitration, the Padres announced he would undergo Tommy John surgery and miss all of 2021.