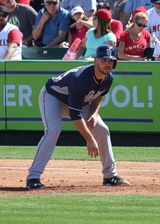 Catcher Austin Hedges made his major league debut in 2015.

Hedges was picked by the San Diego Padres in the second round of the 2011 amateur draft. He was their sixth overall pick due to four supplemental round selections, following Cory Spangenberg, Joe Ross, Michael Kelly, fellow catcher Brett Austin and Jace Peterson. The 82nd overall pick, he was scouted by Josh Emmerick. He turned down a UCLA offer to sign.

Austin played briefly in 2011 for the AZL Padres (5 for 16, HR, 5 BB, 4 RBI in 5 G) and Eugene Emeralds (1 for 10, 2 BB). In 2012, he hit .279/.334/.451 with 28 doubles for the Fort Wayne TinCaps and threw out 31.5% of attempted base-stealers. Baseball America rated him as the #7 prospect in the Midwest League (between Aaron Sanchez and Kaleb Cowart) and the #6 Padres prospect. He opened 2013 with the Lake Elsinore Storm. He and Josh Phegley were picked as the US catchers for the 2013 Futures Game. When Phegley was called up to the majors and replaced by James McCann, Hedges got the start for the USA and hit 9th in a 4-2 win. He popped out against Andre Rienzo in the third and grounded out to Miguel Sano while facing Michael Ynoa in the 4th. The only runner who tried to steal off him, Xander Bogaerts, was gunned down. McCann replaced Hedges in the 6th.

He made his big league debut for the Padres early in the 2015 season and played 56 games, but hit just .168 with 3 homers and 11 RBIs. As a result he spent almost all of 2016 in the minors, just coming up for 8 games when he hit .125. However, he became the team's starting catcher in 2017 and had a solid season, hitting 18 homers and 55 RBIs in spite of a batting average that was just .214 in 120 games. His playing time dropped some in 2018, as he played 94 games, but his offensive numbers improved, to .231 with 14 homers and 37 RBIs. The improvement was mainly reflected in his OPS+ that went up from 73 to 94. This was in addition to defensive work that was impeccable. In 2019, the Padres improved significantly and while his hitting was down below the Mendoza Line in the first two months of the season, he kept his starting job thanks to his solid handling of a young pitching staff and his occasional displays of power and timely hitting. One of these came on June 7th, when he hit the first walk-off hit of his career, against Sean Doolittle of the Washington Nationals. His two-out single drove in Josh Naylor, who had just tied the game, from second base for a 5-4 win. The Padres faded in the second half and he finished the season at .176 in 102 games, with 11 homers and 36 RBIs, his OPS+ falling all the way to 50. He gradually lost playing time to rookie Francisco Mejia, who was a much better hitter.

In 2020, with the Padres aiming at returning to the postseason after a 14-year drought, the original plan was to have he and Mejia split time behind the dish again, but while the team played pretty well in its first five weeks, the catching tandem was a disaster with Hedges hitting .158 in 29 games and Mejia an even worse .079. The Padres called up youngster Luis Torrens a month into the season, but they really wanted an experienced backstop who could actually hit some, and on August 30th acquired a couple of these in Austin Nola and Jason Castro in separate deals. The writing was clearly on the wall for Austin, and the next day he was included in a six-player package that landed ace P Mike Clevinger from the Cleveland Indians, alongside 1B/OF Josh Naylor, P Cal Quantrill and three prospects - Gabriel Arias, Owen Miller and Joey Cantillo. He was headed to another playoff-bound team, but would now become the team's third catcher behind Sandy Leon and Roberto Perez.