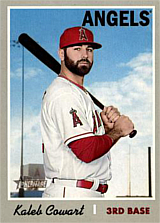 Kaleb Cowart has played parts of five seasons with the Los Angeles Angels. Although there have been several major league players named "Caleb", he is, so far, the only Kaleb.

Cowart was a power-hitting third baseman in high school who hit 97 mph on the radar gun when he toed the hill. Most scouts were projecting him as a pitcher going into the 2010 draft, though he wanted to focus on hitting. He went 18th overall, to Chris McAlpin and the Angels, as compensation for the loss of Chone Figgins to free agency. He went 5-for-26 with a walk and a homer for the 2010 AZL Angels and Orem Owlz in his pro debut. After being called up to make his major league debut on August 18, 2015, Kaleb started his big league career 0-for-14. His first hit was a home run off Marco Estrada of the Toronto Blue Jays on August 22nd. He hit .174 in 34 games that season, the first of a string of years in which he failed to establish himself, from 2015 to 2018. He played between 31 and 50 games each year, failed to break the Mendoza Line during three of these, and hit just .225 in the other one (in 2017).

It was clear he was unlikely to become a major league regular, so after the 2018 season the Angels placed him on waivers. He was quickly picked up by the Seattle Mariners, who said that they would be looking to try him out as a two-way player. He had never pitched professionally, but Mariners GM Jerry Dipoto was very familiar with Kaleb as he was the GM of the Angels for a time and had always considered Kaleb a top prospect on both sides of the ball. Given he had no minor league options remaining, he would have to make the team as a super utility player and learn to pitch on the job. Before the plan could be implemented, the Mariners placed him on waivers and, on January 24th, he was picked up by the Tigers. A month later, he was re-claimed by the Angels. After extended spring training, he was sent to the AA Mobile Bay Bears to begin the 2019 season, then was promoted to the AAA Salt Lake Bees despite hitting just .179 in 11 games with Mobile. He was being used regularly as a pitcher, even if initial results were so-so (his ERA was 6.23 in 4 outings in AA). Eventually the project was scrapped, and Kaleb got a call up in September, playing nine games on the infield and hitting .160. He was cut loose after the season and signed a minor league deal with the New York Yankees for 2020.