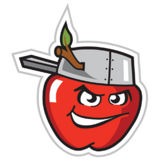 The Fort Wayne TinCaps, of the Midwest League and briefly in High-A Central, are nicknamed for John "Johnny Appleseed" Chapman, who is buried in Fort Wayne; legend says his cooking pot doubled as a cap. The San Diego Padres farmhands play their home games at Parkview Field in Fort Wayne, IN.

In its first season under the new identity, the team finished first by 12 games, winning both halves of the Eastern Division season, then won the MwL crown by defeating the Burlington Bees in the finals. The old identity was Fort Wayne Wizards, the brand the Kenosha Twins adopted when they brought professional baseball back to Fort Wayne in 1993. They changed brands to TinCaps in conjunction with their 2009 into The View.

The city's baseball history includes the First game in major league history in 1871 - but the city lost its last previous pro team in 1935.

MLB's 2021 Minor League Reorganization raised the 'Caps, and most of the MwL, one level. The over-arching goal was to lessen distances between parent and farm clubs, but the Padres wanted to keep their players in the Summit City. Speaking of nicknames, Fort Wayne's is that because it was the highest point on the 1820s-era Wabash & Erie Canal.

This page is in need of some additional content. Please help the Bullpen by expanding it, or learn how to contribute.
Retrieved from "https://www.baseball-reference.com/bpv/index.php?title=Fort_Wayne_TinCaps&oldid=1231575"
Categories: