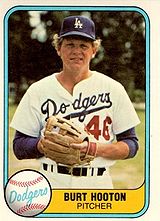 Burt Hooton will be remembered for two things: his knuckle curve pitch and the no-hitter he threw as a rookie on April 16, 1972, in his first appearance of the season. Hooton went on to have a respectable career, pitching mostly with the Los Angeles Dodgers, pitching in the 1977, 1978, and 1981 World Series. He was the Most Valuable Player of the 1981 NLCS, during which he won two games against the Montreal Expos. Hooton had extended stretches of quality pitching, as seen by the fact he won the National League Pitcher of the Month Award three times in his career: August 1975, September 1975 and June 1983.

Hooton led the 1970 Amateur World Series with 44 strikeouts (in just 24 innings). He was the only pitcher to beat the Cuban national team in the event, doing so in the round-robin. In the finals, he lost to Cuba in 11 innings, being out-dueled by José Antonio Huelga. He finished with a 0.00 ERA to tie Emilio Salgado and Manuel Hurtado for the lead, but he worked more innings than they did.

After his playing career ended, Hooton was pitching coach of the Salem Dodgers in 1988-1989, the San Antonio Missions from 1990 to 1994, and the Albuquerque Dukes in 1996. He was the pitching coach at the University of Texas at Austin from 1996 to 1999. He began 2000 in the same capacity with the Round Rock Express, before moving up to the Houston Astros from mid-2000 to 2003. Hooton was again pitching coach of Round Rock from 2005-2010. With an affiliation shift, Hooton moved to the Oklahoma City RedHawks in 2011-2012. Hooton joined the San Diego Padres organization as pitching coach of the Fort Wayne TinCaps in 2013-2019.