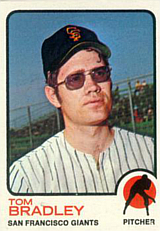 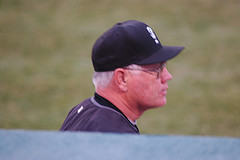 Before embarking on a seven season big league career, bespectacled pitcher Tom Bradley earned a degree in Latin at the University of Maryland.

Tom was originally drafted by the California Angels but had his greatest success with the Chicago White Sox, who acquired him following the 1970 season. In his first year with the Sox, 1971, he won 15 games, struck out 206, and threw 6 shutouts. He was even better at the start of 1972, beginning the year with a 10-4 mark before tailing off in the second half. That season, manager Chuck Tanner made the unusual decision to go with a three-man starting rotation consisting of Wilbur Wood, Stan Bahnsen and Bradley, with fourth starter Dave Lemonds making only half as many starts as the top three. That meant a lot of work for the front-line starters, and, while knuckleballer Wood had no trouble handling the workload, both Bahnsen and Bradley showed the effects of overwork. Still, his overall mark of 15-14, 2.98 with 209 strikeouts was quite solid, and the White Sox were a surprise contender for the AL West title that year. After the season, Chicago traded him to the San Francisco Giants for Ken Henderson and Steve Stone, and he spent the last three seasons of his big league career with the Giants. He had another good season in 1973, going 13-12, but his ERA shot up by more a than a run to 3.90 and was never effective again.

After his playing days ended, Bradley was pitching coach at St. Mary's College of California in 1978 and head baseball coach at the Jacksonville University from 1979 to 1990 and at Maryland from 1991 to 2000. Bradley was the manager of the Medicine Hat Blue Jays in 2001 and the pitching coach for the Charleston Alley Cats in 2002 and Auburn Doubledays in 2003. In 2004, he returned to Charleston and in 2005 he was pitching coach of the Lansing Lugnuts. Bradley joined the San Diego Padres organization in 2006 as the pitching coach of the Fort Wayne Wizards of the Midwest League and, in 2007, moved on to the Eugene Emeralds. In 2008-2009 he returned to Fort Wayne as the team became the Fort Wayne Tincaps. Bradley went back to Eugene in 2010.