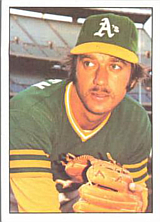 Stan Bahnsen was a star at the University of Nebraska before being selected in the fourth round of the 1965 amateur draft - the very first ever held - by the New York Yankees. He began his professional career straight at the Triple A level and saw immediate success, pitching a no-hitter in 1966 before getting his first taste of big league action in September. He spent the 1967 season with the Triple A Syracuse Chiefs, throwing a seven-inning perfect game along the way, before joining the Yankees for good at the beginning of the 1968 season.

Stan had an outstanding rookie season, winning the 1968 American League Rookie of the Year Award thanks to a 17-12 record with a 2.06 ERA in 267 innings. He had to balance his pitching assignments with Army Reserve duties most of the summer, which forced him to pitch only on weekends. He was a member of the Yankees' starting rotation over the next three seasons, but never matched his success as a rookie, even after he won 14 games in both 1970 and 1971. Part of his problem was his struggle in adapting to the lower pitching mound adopted in 1969. He had an outstanding fastball in those days, with Carl Yastrzemski calling him "the hardest thrower in the league".

In 1972, "The Bahnsen Burner" was traded to the Chicago White Sox for third baseman Rich McKinney, who turned out to be a notorious bust for the Yankees. Things went very different for Bahnsen. White Sox manager Chuck Tanner took the highly unusual decision to go with a three-man pitching rotation that year, taking advantage of the presence of rubber-armed knuckleballer Wilbur Wood on his staff. Wood started a league-leading 49 games that year, while Tom Bradley started 40 and Bahnsen 41; fourth starter Dave Lemonds only made 18 starts. Bahnsen pitched 252 innings with a 3.60 ERA and managed a 21-win season (against 16 losses) as the White Sox came out of nowhere to finish second in American League West. In 1973, Tanner tried another radical system, using his two best starters, Wood and Bahnsen, as often as possible, and slotting other pitchers between them when they needed rest. The two workhorses combined for 90 starts, but a dip in offensive support meant they both lost 20 games (21 in the case of Bahnsen) while the White Sox slipped to 5th place. On August 21st [1], he took a no-hitter into the 9th inning in Cleveland, just to see Walt Williams bounce a ball over third baseman Bill Melton's head with two outs; he settled for a one-hit shutout. By 1974, Bahnsen was showing the strain of all those innings pitched, especially since he had never been economical with his pitches. In fact, one rival manager was quoted in 1973 as saying: "he seems to enjoy putting two men on base every inning just to see if he can work his way out of the jam". His ERA jumped over a full run to 4.71, he walked 110 men while striking out only 102, and his record fell to 12-15.

Stan was traded to the Oakland Athletics at the trading deadline of 1975, and this time he was the third starter being slotted behind two workhorse starting pitchers - Vida Blue and Ken Holtzman. The A's won their fifth consecutive AL West title, but Bahnsen was not used in the American League Championship Series, where the Athletics were swept in three games by the Boston Red Sox. By 1976, he was reduced to the role of long reliever and spot starter and was traded to the Montreal Expos on May 22, 1977. Even though his ERA was an ungodly 6.14 at the time, the Expos were in desperate need of starting pitchers, and Bahnsen filled the bill acceptably, making 22 starts with 8 wins and a 4.81 ERA the rest of the way. Manager Dick Williams recognized that his days as a reliable starting pitcher were over and decided to make him his closer for the 1978 season. Bahnsen, who had saved three games in his entire career until then, had five saves by May 12, but was then sidelined by an injury. By the time he was ready to come back, the Expos had acquired Mike Garman from the Los Angeles Dodgers to act as closer, so Bahnsen shifted to middle relief. He had two very solid seasons in that role in 1979 and 1980, as the Expos became one the National League's top teams, pitching over 50 games each season with ERAs in the low 3.00s. Unfortunately, he is best remembered by Expo fans for giving up a game-winning two-run home run to Mike Schmidt in extra innings on October 4, 1980 [2], handing the National League East championship to the Philadelphia Phillies.

Bahnsen pitched two more seasons after that, but he had little left. He was reduced to mop-up relief when the Expos won the second half title in the strike-shortened 1981 season. He did make the lone postseason appearance of his career that year, coming on in relief of Scott Sanderson with the Expos down 2-0 in the 3rd inning in Game 4 of the Division Series against the Phillies [3]; he proceded to allow a two-run single to the first batter he faced, Keith Moreland, placing his team in a deep 4-0 hole. The Expos released him at the end of spring training in 1982, and he pitched a handful of games for the Angels and Phillies that year before calling it a career.

In 1989, Stan played for the Gold Coast Suns of the Senior Professional Baseball Association. In 1990, he played for the Daytona Beach Explorers and had a record of 1-2 in 3 games when the league folded. In 1992, Bahnsen became the first former Major League pitcher in the 80-year history of Hoofdklasse Honkbal. It would be 12 years until Calvin Maduro became the second. He was not the first player to appear in both the majors and Hoofdklasse - that had been Win Remmerswaal, who started in Holland before coming to the USA. Bahnsen pitched for Haarlem Nicols and was 46 years and 4 months old when he played in the Netherlands. It was a Dutch Major League record for oldest player until 2008, when Fausto Álvarez broke it. He later settled in Florida where he worked as a promoter for baseball-themed cruises.