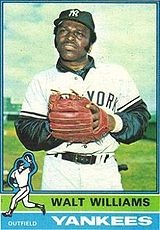 "Williams, popularly known as "No Neck" -- a nickname he may or may not have liked, depending on the account... [was] popular also for his hustling style of play..." - from Major League Baseball's obituary for Walt Williams

Walt Williams played ten years in the majors and hit above .300 one year as a member of the Chicago White Sox. His MLB obituary states that a typhus vaccination when young caused his neck to shrink. The appearance of having no neck was undoubtedly also helped by his muscularity.

Originally signed by the Houston Colt .45's, Williams reached the majors with the club early in the 1964 season before being claimed off waivers by the St. Louis Cardinals. In the Cards system, he hit .330 in both 1965 and 1966 to capture batting titles in the Texas League and Pacific Coast League in back-to-back seasons. Following the 1966 season, he was traded to the Chicago White Sox, along with Don Dennis, for catcher Johnny Romano.

Williams saw playing time as a backup outfielder for the Sox in 1967 and 1968 before taking over as the team's regular right fielder in 1969. He hit .304 in his first year as a regular and became the first Sox player in five years to hit over .300.

After six seasons with the Sox, Williams was traded to the Cleveland Indians for shortstop Eddie Leon following the 1972 season. With the Tribe, he broke up a no-hitter by White Sox pitcher Stan Bahnsen with two outs in the 9th on August 21, 1973. He was later traded to the New York Yankees and spent his last two big league seasons there. According to the family's obituary notice (see below), he also played in Venezuela,, Japan and Mexico.

In 1989, Williams played for the St. Lucie Legends of the Senior Professional Baseball Association. He hit .257 in 11 games with the club.

Williams' nephew, Derwin Williams, played parts of a couple of seasons with the New England Patriots in the NFL (1985 to 1987). Derwin's son and Walt's grand-nephew, Mason Williams, has played off-and-on in the big leagues since 2015, most recently for the Baltimore Orioles.