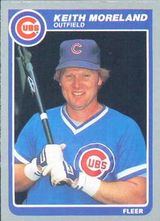 "I don't think I have ever seen a better hitter at the plate when the game is on the line than Keith Moreland." - Gary Matthews, quoted in the book Cubs: Where Have You Gone

Keith Moreland was a multi-talented player who had twelve seasons in the major leagues, mostly in the National League. He then became an announcer for the Chicago Cubs.

He went to RL Turner High School in Dallas, TX where he starred in three sports, and then went to college where he was a defensive back as well as a third baseman. Moreland was at the University of Texas from 1973 to 1975, being part of the 1975 College World Series championship team. He was at UT at the same time as Jim Gideon and Rich Wortham. He was signed by the Philadelphia Phillies after being picked in the 7th round of the 1975 amateur draft.

Much of his minor league career was spent with the Reading Phillies and Oklahoma City 89ers, where he hit for a good average and some power.

He originally came to the majors in 1978 as a catcher, and had a good year in 1980 hitting .314/.341/.440. In the 1980 World Series he hit .333, playing DH. In the 1981 Division Series, he slugged .692. In those years, he was playing behind Bob Boone, a mediocre hitter but a tremendous defensive catcher. Boone got the bulk of the work, but manager Dallas Green inserted Moreland in the starting line-up with the Phils on the brink of elimination in the 1981 NLDS in order to add some offense to his line-up.

After the 1981 season he was traded to the Chicago Cubs (his former manager Green had become the general manager in Chicago) and he began to play more outfield than catcher. From 1982 to 1987 with the Cubs, he hit homers in double figures each year. While never finishing in the top ten in slugging percentage, he twice finished in the top ten in batting average while with the Cubs, who won a division title in 1984 while he was there. In 1985 his 106 RBI were fourth in the National League, as he frequently drove home Ryne Sandberg. He also stole 12 bases that year, getting caught only three times.

He hit a peak 27 home runs in 1987. 1987 was also the first year in which he spent no time at catcher, playing 150 games at third base in place of Ron Cey, who had been traded prior to the season. He was a fan favorite in Chicago, and Steve Goodman inserted his name in his bittersweet paean to the Cubs, A Dying Cubs Fan's Last Request, among the things he would want to see at his Wrigley Field funeral, with the line "Have Keith Moreland drop a routine fly ball". Moreland's fielding in the outfield was indeed sometimes an adventure, but he compensated with his bat.

Moreland was traded to the San Diego Padres in 1988 in the deal that brought Rich Gossage to the Cubs, but his power was gone after that. Bill James had long pointed out that he was one of the players whose hitting statistics were most helped by the hitter-friendly Wrigley Field, and not only did he leave that ballpark for the much harsher environment of Jack Murphy Stadium, but home runs went down significantly across baseball from 1987 to 1988, and he was one of the main victims. He hit .256 in 143 games for the Padres, with 5 homers and 64 RBI, and was traded again after the season, to the Detroit Tigers with Chris Brown for Walt Terrell. Then, halfway through the 1989 season, he was traded once more, to the Baltimore Orioles. In spite of that, he was still able to hit .278 in his last season, close to his career batting average of .279, but with only 6 homers and 45 RBI in 123 games.

The site "Bleed Cubbie Blue" chose Moreland as #60 on its list of the Top 100 Cubs of all time. The site says that after his playing days Moreland was a high school baseball coach, a roving minor league instructor, and a college radio announcer. He was Ross Ohlendorf's coach all four seasons at St. Stephen's Episcopal High School in Austin, TX. Another article says that after his playing days Moreland earned his college degree and briefly coached at UT but switched to broadcasting when one of his friends needed the coaching job.

As they headed into spring training in 2011, the Chicago Cubs announced that Moreland would replace Ron Santo, who had passed away earlier in the off-season, in the broadcast booth. Moreland moved to the University of Texas' Longhorn Network in 2014 [1]. He also did announcing for ESPN of the 2015 CWS Regionals in the Dallas Regional, 2015 CWS Super Regionals in the Fayetteville Super Regional, and 2017_CWS_Regionals in Houston.