Former pitcher Dallas Green became the assistant farm director for the Philadelphia Phillies from 1970 to 1972. He was the director of player development from 1973 to 1974 and Scouting Director from 1975 to 1979.

Green went on to later manage the Phillies to the World Series championship in 1980. He became General Manager of the Chicago Cubs from October 1981 to 1987. Green also managed the New York Yankees and New York Mets. Green spent the 2000s as a senior advisor to the GM of the Phillies. He still held that title as of 2011. 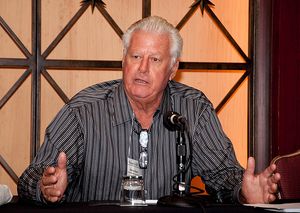 Green speaks at a SABR meeting in August 2009

He and Lee Elia, one of his managers for the Cubs, both went to the University of Delaware.

Green had an eight-year career in the majors, pitching for the Phillies at the time when Dick Allen first came up.

His son, John Green, played in the minors from 1985 to 1990 and scouted for the Pittsburgh Pirates, Baltimore Orioles and Los Angeles Dodgers. John's daughter Christina-Taylor Green was one of the victims of a tragic shooting near Tucson, AZ on January 8, 2011, in which six persons died and U.S. Representative Gabrielle Giffords (D-AZ) was seriously injured; Miss Green had been active in student government as well as Little League and had gone to see democracy in action. Dallas Green passed away in 2017 after a long illness at a Philadelphia, PA hospital.

Canadian rock musician Dallas Green was named after him, as he was born during the Phillies' run to a World Series title in 1980; he performs and releases music under the name City and Colour, the city being Dallas and the colour being green.