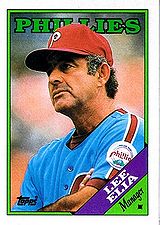 Lee came out of the University of Delaware, where he attended a few years after Dallas Green, who would later be his general manager. Lee was at Delaware at the same time as Al Neiger.

He played in the minors from 1959-1965, getting his first shot at the majors in April 1966. He played shortstop for the Chicago White Sox that season, appearing in as many games as Jerry Adair but slightly fewer innings.

Elia returned once again to the Phillies in 1991, managing the Clearwater Phillies to the best record in the Florida State League, then moving up to the Scranton-Wilkes Barre Red Barons in 1992. He then became a coach for the Seattle Mariners in 1993 and remained on their staff through 1997. After two seasons as a scout, he was a member of the Toronto Blue Jays staff in 2000. From 2003 to 2005, he was hitting coach for the Tampa Bay Devil Rays, and in 2006, Elia was a bench coach for the Baltimore Orioles. On June 10, 2008, he was asked to replace Jeff Pentland as the Mariners' hitting coach. A week later, he became the team's bench coach when bench coach Jim Riggleman replaced fired manager John McLaren.

In 2011-2012, Elia was a Special Assistant to GM for the Atlanta Braves, serving in the area of player development and was also listed as a special assistant coach with the major league field staff.