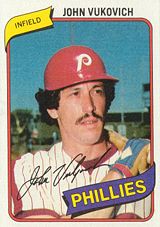 Third baseman John Vukovich played parts of ten seasons in the majors, mostly with the Philadelphia Phillies. A back-up throughout his playing days, he never appeared in more than 74 games in a season and hit .161 during his career. "Vuk" was nonetheless loved by fans and teammates for his work ethic and defensive skills.

After retiring as a player, he was a Chicago Cubs coach from 1982 to 1987 and managed the team for two games (a doubleheader) in 1986. In 1988, he joined the Phillies coaching staff and remained with the club through the 2004 season. He also was the team's interim skipper for 9 games at the end of the 1988 season, taking over after the firing of Lee Elia.

Mike Schmidt called him "the best friend I had". Larry Bowa said "..he was my best friend. He was a great guy. We played American Legion ball in Sacramento. We came up together in the minors. Anything I wanted, I just asked him."