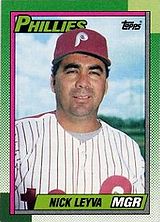 Infielder Nick Leyva is one of only two players to be selected to the First-Team All-Southern California Intercollegiate Athletic Conference four times [1]. He did so for the La Verne College from 1972 to 1975. Leyva was selected in the 24th round of the 1975 amateur draft by the St. Louis Cardinals and played three seasons in the minors, hitting .267 with 8 home runs in 253 games.

After retiring, Leyva managed in the minors for the Cardinals from 1978 to 1983. Leyva was then a Cardinal coach from 1984 to 1988. In 1989, he became manager of the Philadelphia Phillies. He led the team to sixth and fourth place finishes in his two full seasons at the helm before being replaced by Jim Fregosi very early in the 1991 season.

Leyva managed the Syracuse Chiefs in 1992 and 1993, and was a member of the Toronto Blue Jays coaching staff from 1993 to 1997. After seven years working in the Chicago White Sox organization, including 2003 and 2004 as minor league infield instructor, he joined the Milwaukee Brewers as third base coach for the 2007 season. He returned to the coaching ranks on June 20, 2008, when his former boss with the Blue Jays, Cito Gaston, asked him to return to the fold as third base coach as he began his second stint at the helm of the Jays. In 2011, he joined the Pittsburgh Pirates as third base coach.

His younger brother, Al Leyva, has been an assistant coach at the University of La Verne.